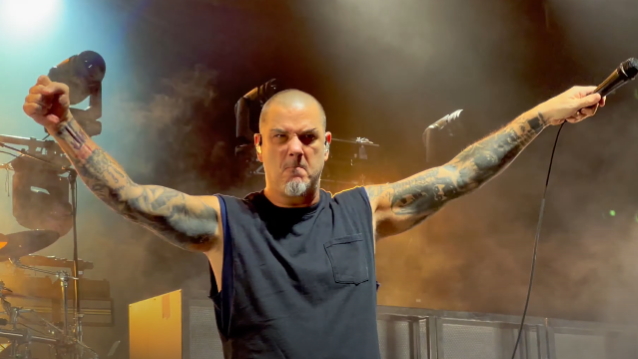 PANTERA's concert in Austria this spring has been canceled following an outcry over singer Philip Anselmo's previous racist remarks.

The reformed band — featuring PANTERA's surviving members Anselmo and Rex Brown (bass) along with guitarist Zakk Wylde (OZZY OSBOURNE, BLACK LABEL SOCIETY) and drummer Charlie Benante (ANTHRAX) — was scheduled to appear at Gasometer in Vienna on May 31 as part of its spring/summer 2023 European tour. However, earlier today (Wednesday, January 25),promoters Barracuda Music and Mind Over Matter Music released a statement on social media saying that the show was scrapped. "All tickets can be returned where they were purchased," the promoters wrote. "Thank you for your understanding."

Barracuda Music and Mind Over Matter Music did not offer an explanation for the cancelation, but the majority of the fans commenting on the promoters' Facebook page assumed that the move was made for the same reason PANTERA's appearances at Rock Am Ring and Rock Im Park festivals in Germany were called off earlier this week.

Most of the backlash that led to the German concert cancelations stemmed from the fact that Anselmo made a Nazi-style salute when he performed at the January 2016 "Dimebash" event at the Lucky Strike Live in Hollywood in honor of late PANTERA guitarist "Dimebag" Darrell Abbott. He also appeared to say "white power" as he made the gesture, but later claimed he was joking about drinking white wine backstage and was reacting to the audience members up front who he says were taunting him.

There was additional criticism with regard to the fact that Rock Am Ring takes place in Nürnberg (known in its English form as Nuremberg),where Hitler supporters held a series of mass Nazi party rallies between 1933 and 1938.

In calling for Rock Am Ring and Rock Im Park organizers to cancel PANTERA's appearances at the festivals, the German Green Party said in the Nürnberg city council that Anselmo "repeatedly and deliberately made Nazi gestures and yelled racist slogans." Réka Lörincz, the spokeswoman for the Greens against racism and right-wing extremism, added that "the former Nazi party premises" were "being deliberately misused for the staging and reproduction of racist and inhuman ideology." The Green Party rep told Germany's Stern magazine that Anselmo's apology for his white power outburst was "not credible enough" and that hosting the band on the former Nazi Party rally grounds "clearly exceeds the limit of what is bearable."

“We are relieved about the organizer's decision not to offer the band PANTERA a stage. Their singer Phil Anselmo had repeatedly attracted attention with anti-Semitic and racist incidents," Lörincz wrote in a statement on the Green Party's web site. "Therefore, a performance was unimaginable for us — especially on the former Nazi party rally grounds."

In the days leading up to the Vienna concert cancelation, the Green party in Vienna demanded that this performance also be scrapped.

"Due to its National Socialist past, Vienna in particular has a special historical responsibility to oppose any form of right-wing extremism. The appearance of PANTERA is completely incompatible with this responsibility," they said in a statement. "Therefore, it can only mean for Vienna: No stage for a Hitler salute, no stage for PANTERA!" At the request of the APA, Barracuda Music explained in a statement on Tuesday (January 24): "We are currently examining the possibility of canceling the show."

Back in May 2019, Anselmo was asked by U.K.'s Kerrang! magazine if he feels the "Dimebash" debate is something he has moved past. He responded: "I feel like it's ridiculous. I made an off-color joke and 'Boom!' — it's like I'm literally Hitler! I'm not. I take each individual one at a time, in the way that any logical individual will. I have love in my heart. Over the years, I've learned to take the first step with love and to put good faith first. I get along with everybody. If there's any doubt about my political leanings, people should get it out of their heads. I was raised amongst a dazzling [cast of characters] from the theatre, from the mental hospital, from all walks of life — all colors, creeds and kinds. It's absurd to me that anyone in this day and age would judge anyone by the color of their skin, their heritage or their religion. I'm a harmless guy. I'm a reactionary, not a troublemaker."

In the days following the "Dimebash" incident, MACHINE HEAD's Robb Flynn — who played PANTERA songs with Anselmo at the event — released an eleven-minute response video in which he denounced Anselmo as a "big bully" and a racist. He concluded by saying that he would never play another PANTERA song again. ANTHRAX's Scott Ian, who is Jewish, released a statement on his official web site saying, "Philip's actions were vile" and invited Anselmo to make a donation to the Simon Wiesenthal Center.

Former PANTERA drummer Vinnie Paul Abbott, who hadn't spoken to Anselmo since the band's split in 2003, was dismissive when asked for a comment on the singer's white-power salute. "I can't speak for him," Vinnie said in a 2016 interview. "He's done a lot of things that tarnish the image of what PANTERA was back then and what it stood for and what it was all about. And it's sad."

In 2017, Anselmo blasted "false journalism in the metal community" for suggesting he was racist because of his actions at "Dimebash".

In the weeks after the "Dimebash" incident, Anselmo's DOWN project canceled a number of shows, including at France's Hellfest, Dutch festival FortaRock and U.K.'s Download. The singer wrote an open letter to the Hellfest organizers in which he said it was not the right time for DOWN to tour. He also revealed that he was suffering from a recurring knee injury and needed rehabilitation.

Posted by Mind Over Matter Music on Wednesday, January 25, 2023