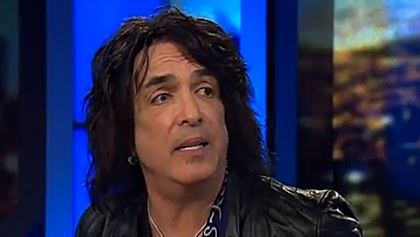 KISS frontman Paul Stanley sang the U.S. national athem, "Star-Spangled Banner", on Sunday, August 25 at Dodger Stadium in Los Angeles before the baseball game between the Boston Red Sox and the Los Angeles Dodgers. Check out video footage of his rendition below. Photos are available at this location.

AEROSMITH frontman Steven Tyler's May 27, 2001 version of "The Star-Spangled Banner" at the 85th Indianapolis 500 — where he came under criticism after he replaced "home of the brave'" with "home of the Indianapolis 500" — made Billboard magazine's "10 worst national anthem performances ever."

POISON vocalist Bret Michaels sang the national anthem in November 2010 at NASCAR's series-crowning Ford Championship Weekend. However, since Bret apparently couldn't hit any of the high notes, he had a local singer named Nanette Molina perform the song with him.