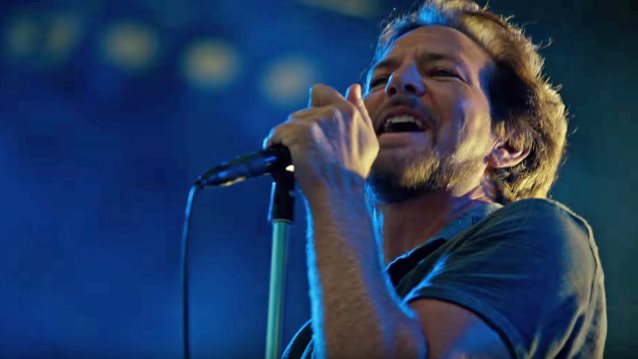 The 2017 edition of PEARL JAM's annual fan-club Christmas single includes a soundcheck version of "Alive", featuring the band's original drummer, Dave Krusen and recorded prior to PEARL JAM's Rock And Roll Hall Of Fame induction performance on April 7, 2017. The second track is a new cover of Chuck Berry's "Around And Around", recorded during a rehearsal for the Rock And Roll Hall Of Fame on March 30, 2017.

Krusen, who played on PEARL JAM's 1991 debut "Ten", is one of the group's two drummers who were inducted into the Rock Hall, the other being current drummer Matt Cameron. The three stickmen who played in between them — Matt Chamberlain, Dave Abbruzzese and Jack Irons — were all invited to attend but did not enter the Hall with the other members.

Krusen left PEARL JAM shortly after the completion of "Ten" due to his struggle with alcoholism, but he got sober and managed to continue a career that included stints with CANDLEBOX and many other artists. He told The Pulse Of Radio a while back what he learned from his time with PEARL JAM. "I learned to get my act together, as far as personally, you know?" he said. "And take care of whatever demons I had that were kind of running my life at the time. And just to be, like, grateful that you get another shot at it. To get one shot is amazing, and to, like, get any other shots at it, you know, you should be glad you're doing it and make the most of it."

Krusen said he was "seriously shocked" to be inducted into the Hall Of Fame, adding: "I obviously feel a little like I'm not so deserving, but I appreciate them going out and doing all of this, and me getting to sneak in at the end."

There has been speculation that PEARL JAM will record a new studio LP in early 2018, the band's first since 2013's "Lightning Bolt".

In November, a new PEARL JAM song called "Obey The Law Of The Heart" appeared on the soundtrack of an upcoming film called "Basmati Blues", starring Brie Larson.