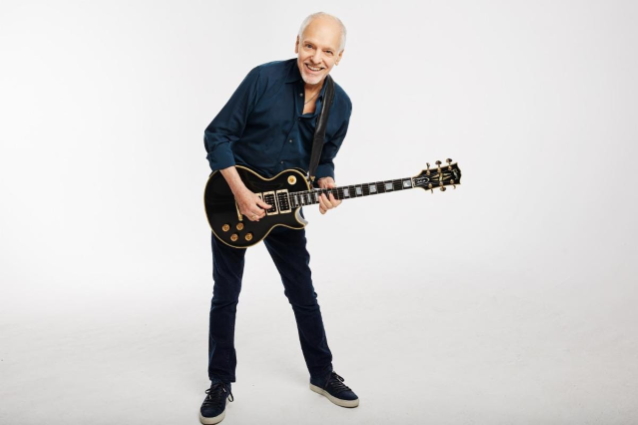 BMG has announced the acquisition of rights to the catalog of one of the most celebrated artists and guitarists in rock history, Grammy Award-winning, multi-platinum-selling singer-songwriter Peter Frampton.

The deal includes Frampton's publishing interests, songwriter, recording artist, and sideman revenue streams, and neighboring rights, spanning his entire musical career from his late-1960s work with U.K. hitmakers THE HERD to 1970s breakthrough supergroup HUMBLE PIE through gaining superstar status as a solo artist with hit songs including "Show Me The Way", "Baby, I Love Your Way", "Do You Feel Like We Do", "I'm In You" and "I Can't Stand It No More", among many others.

His boyhood friend David Bowie, whom he accompanied on the "Glass Spider" tour, lauded Frampton's guitar-playing, describing it as an "English approach to the blues, American music played in an English style."

Frampton said: "I am so pleased to join the BMG family. As an artist-first company, I trust BMG will care for my legacy and that my songs are in good hands."

Thomas Scherer, BMG president, repertoire and marketing, Los Angeles and New York, said: "From his incredible early rise of success to HUMBLE PIE, his countless collaborations to achieving global stardom as a solo artist, Peter Frampton is one of the most inspirational and tireless musicians of his time. We are proud a legendary artist of his caliber entrusts BMG as the custodians of his most treasured works. A revered musical catalog of this magnitude, paid tribute to by countless artists, will continue to live on for generations."

Frampton became a successful child guitarist and at the age of 16 he joined THE HERD, landing three British Top 10 hits.

In 1976, Frampton redefined his music career releasing the U.S. chart-topping, eight-times-platinum-certified "Frampton Comes Alive!", featuring live versions of songs from his first four solo albums. The album would go on to receive a Grammy nomination for "Album Of The Year" and remain No. 1 on the Billboard charts for 10 weeks in the U.S. It was certified three times platinum in Australia and gold in both the U.K. and Canada. After more than four decades, the album remains one of the top-selling live records of all-time with sales of over 17 million worldwide.

His follow-up studio album "I'm In You" again achieved commercial success around the world with the album being certified platinum in the U.S., Australia, Canada, and silver in the U.K.

His 2019 album, "All Blues", was No. 1 for 15 weeks on Billboard's Blues chart, his 2020 autobiography "Do You Feel Like I Do?: A Memoir" debuted on The New York Times bestsellers list, and most recently, his new album "Frampton Forgets The Words" was released to widespread critical acclaim.