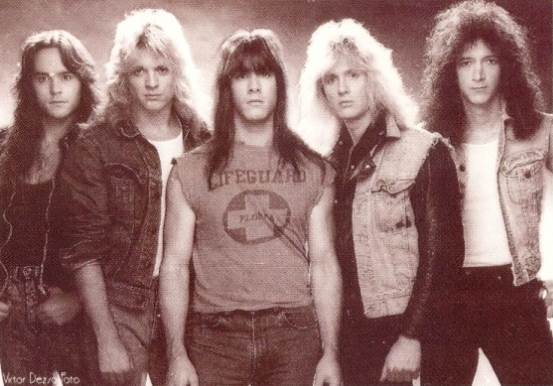 Former ANNIHILATOR frontman Randy Rampage passed away on August 14 at the age of 58. The singer, whose real name was Randall Desmond Archibald, was also a founding member, bass player and occasional vocalist of the Canadian hardcore band D.O.A.

According to the Vancouver Sun, Randy held down a job as a longshoreman in between music gigs. He worked on the docks of Vancouver's North Shore Tuesday, then came home and was relaxing in a chair watching a "South Park" DVD on TV when he suffered an apparent heart attack.

Rampage was open about being a fully functioning heroin user for years, a subject he covered in his biography "I Survived D.O.A.", written with Chris Walter.

Randy appeared on ANNIHILATOR's debut album, 1988's "Alice In Hell", before leaving the band. In 1999, he returned to the group and recorded one more album called "Criteria For A Black Widow" after which he left once again to rejoin D.O.A.

The news of Randy's passing was originally reported by the Facebook page of the documentary "Bloodied But UnBowed", a historical look at the evolution of punk rock on the West coast of North America during the 1978-1983 timeframe. Randy made an appearance in the documentary, which was narrated by Billy Hopeless (formerly of THE BLACK HALOS) and released in 2010.

"Tonight sometime after 7pm Randy Rampage left us to reign in the heavens," a message from "Bloodied But UnBowed" read. "A punk legend has moved on. And because he shared himself with you, please share a moment and think of Randy Desmond Archibald aka Rampage. We love you Randy."

In a 2017 interview with Metal Insider, ANNIHILATOR mainman Jeff Waters stated about Rampage: "He couldn't sing, but he was the coolest attitude guy we've ever had in the band, because he was like a punk rocker. He played bass in a band called D.O.A., and had this attitude that was second to none."

Rampage told Punk Globe that singing for ANNIHILATOR "was a fuckin' blast. It was like this metal band that was really hot at the time but didn't have a frontman, so their manager — a local music and porn promoter who D.O.A. had played for many times — recruited me," he said. "I had never really done any serious vocal work before, so when Gary asked me if I knew of any heavy metal singers who were looking for a gig, I opened my mouth and said I was the guy, and then we were in a recording studio. Next thing I was in Fiasco Brothers [studio] recording. ANNIHILATOR was a good run, especially in Europe. I got fired for beating up the guitar player songwriter."

R.I.P. Randy. Thanks for your unique and legendary voice.

Very sorry to hear of the passing of another hero. RIP Randy Rampage #doa#annihilator#vancouver#canada#riprandyrampagepic.twitter.com/ububqhhsJ8

Tonight sometime after 7pm Randy Rampage left us to reign in the heavens. A punk legend has moved on. And...

Posted by Bloodied But Unbowed on Wednesday, August 15, 2018