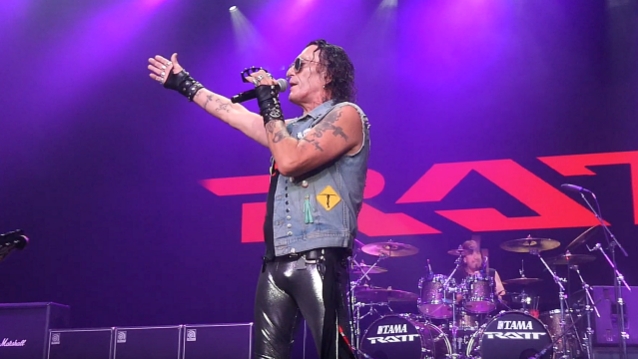 RATT To Be Featured In New GEICO Commercial

According to Metal Sludge, RATT will be featured in a brand new TV commercial for the Geico insurance company.

Geico has been running a number of hilarious commercials lately, and the RATT spot sounds like it will be another winner.

The upcoming commercial will reportedly feature a woman calling an exterminator to rid her home of rats, only to open the bathroom door and find the members of RATT performing their hit song "Round And Round".

"Round And Round" is featured on RATT's debut album, "Out Of The Cellar", which came out in 1984 via Atlantic Records. The accompanying music video starred Hollywood legend Milton Berle (whose brother Marshall managed the group) and became a staple of MTV, propelling "Out Of The Cellar" to triple-platinum status.

The news of RATT's collaboration with Geico comes just days after guitarist Chris Sanders confirmed his exit from the band.

RATT has not yet announced a replacement for Sanders.

The band is rumored to be joining forces with Tom Keifer, SKID ROW and SLAUGHTER for a U.S. tour this summer, with the official announcement expected next Monday, February 24.