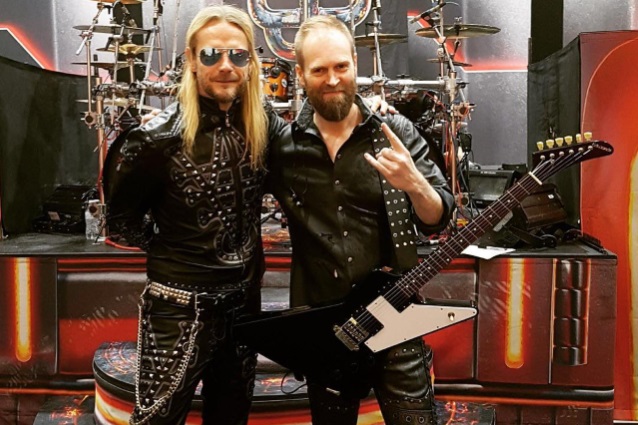 Tipton was diagnosed with Parkinson's disease 10 years ago, but only recently announced he was going to sit out touring activities in support of "Firepower". The guitarist, who is now 70 and has performed on every PRIEST album since the band's 1974 debut set, "Rocka Rolla", is not quitting the band, but simply cannot handle the rigorous challenges of performing live.

Former PRIEST guitarist K.K. Downing recenty released a statement in which he said that he was "shocked and stunned" that he wasn't approached to rejoin the band and suggested that Sneap's "contribution to the new JUDAS PRIEST album was much more than just as a producer." Those claims were quickly dismissed by Rob Halford, who asserted Tipton performed his parts on the album.

Thus far on the "Firepower" tour, Faulkner has been handling the bulk of Downing's solos in addition to many of Tipton's. The show features a short video tribute to Tipton during his solo on "Painkiller", which is now played by Faulkner. The band's set includes a mix of "Firepower" cuts, live staples and perhaps most notably, longtime fan favorite "Saints In Hell" from 1978's "Stained Class", which was yet to be performed live until this tour.

In an interview with veteran Japanese journalist Masa Itoh (audio below),Faulkner was asked to go into the thought process behind choosing Sneap to replace Tipton. "Andy was very much aware of the situation, which is one of the reasons why he was trusted to take this position," Richie said. "He was sensitive to Glenn's situation, he took it seriously and having that trust with Andy is important when we were considering who was going to fill in for the live thing. Andy was the choice, the first choice. It was Glenn who suggested Andy. He's a good guitar player. He's sensitive to the situation. He's not going to come in and want to take over everything. Actually, in testament to Andy, he was the first guy to say, 'I'm not joining JUDAS PRIEST. I'm here to help Glenn and help the band, but Glenn is the guitar player in JUDAS PRIEST and that's it.' Again, respect to Andy for realizing that situation, which is why I think it confirmed that was the right choice to make with Andy. No, on the record, he didn't play anything. Him and Tom Allom, which is obviously one of the producers from back in the day, they were just fundamental in how this record sounds, getting the best performances out of everybody, getting the best sounds and the best energy that is possible. Again, it's like a family and he was a part of that family so it makes sense for him to be there, flying the flag for Glenn."

"Firepower" was released on March 9 via Epic. The follow-up to 2014's "Redeemer Of Souls" was recorded by Sneap, Allom and engineer Mike Exeter (BLACK SABBATH). The cover artwork for "Firepower" was created by the Chilean/Italian artist Claudio Bergamin.