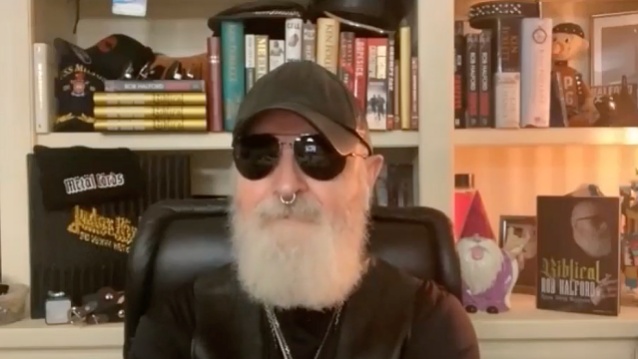 In a new interview with Metal Express Radio, JUDAS PRIEST singer Rob Halford spoke about what fans can expect to hear on the band's upcoming follow-up to 2018's "Firepower" album. He said (as transcribed by BLABBERMOUTH.NET): "When you're in a band, you're always trying to better yourself; you're always trying to say, 'This is the best album we've ever made.' It's just a natural thing to do. And I'm aware of the great success and love that was given to 'Firepower'. And so how do you deal with that? Well, firstly, you have to let that go. You have to let that go, because it's like you're chasing after something that's elusive. What's the point of trying to emulate something that you've already done? We've just gotta do like we've always done with PRIEST, the way that every album has its own concept, every album has its own thing. 'British Steel' isn't 'Painkiller'; 'Painkiller' isn't 'Point Of Entry'; 'Point Of Entry' isn't 'Nostradamus'. So this album is shaping up to be its own thing."

He added: "It's great. It's a really good album, and I know our fans are gonna love it."

Regarding the progress of the recording sessions for the next PRIEST LP, Halford said: "As I've been saying in these recent Zooms [interviews], they're all waiting for me, because all the music is done. I've got the album here in front of me, on my laptop, and it sounds fucking amazing, which you expect every musician to say. But I've really gotta do my work now and make sure that what I do relates to the great work that the guys have done.

"So, it's coming together," he continued. "It'll be ready when it's ready. But we're trying to stick on a timeline. We're hoping to do this Ozzy [Osbourne] tour [of Europe in May]. Please, Ozzy, be well enough; I think he will be. Once we do the Ozzy tour, then we're gonna really get into the back end of finishing the record and then probably being ready to release that. I'm saying now… I did say '23. It looks like it's '24 — which isn't that far away. It's already almost February in 2023.

"I think if you look back at all the work that we've done — apart from that time in the '80s when we were making an album and a world tour literally year in and year out for three or four years… You can do that when you're in that mindset at that point in your life and in the band when things are just roaring. This far on, when you've done so much work and you are aware of what you've achieved, then I think naturally you take your time more."

Last November, JUDAS PRIEST guitarist Richie Faulkner spoke to Robert Cavuoto of Metal Rules about the musical direction of the band's upcoming LP: "You know what? The Internet seems to know everything these days about what the new album's going to sound like based on a couple of words that [we've] put out there [in previous interviews]. I think we've used the word 'progressive', and everyone thinks it's gonna become 'Nostradamus' [PRIEST's controversial 2008 symphonic heavy metal concept double album about Nostradamus], or RUSH, which is two different things. I've definitely used the word 'progressive' [to describe the new PRIEST material in previous interviews], purely because it's got a few musical turnarounds that 'Firepower' doesn't have. But that doesn't make it a RUSH record. It just makes it — instead of, like, a verse into a bridge into a chorus, there might be a couple of more musical passages in there to make it a bit more… interesting; might be the wrong word. I don't know. You've gotta be careful with the words you use these days. So it's not 'Firepower 2', but it's the same band a few years later, so there's obvious connections to the last record. But it's not 'Firepower 2' by any means."

Asked if longtime PRIEST guitarist Glenn Tipton, who was diagnosed with Parkinson's disease nine years ago after being stricken by the condition at least half a decade earlier, will play on the band's album, Richie said: "He will be, yeah. I don't think he's recorded his guitar parts yet, but he's definitely involved in the writing of it. Obviously, we're all aware of his challenges with Parkinson's, so we were adamant that if he couldn't play that particular day that he was involved in the writing. He'd share his ideas with me and I'd kind of be his… he would share his ideas through me."

In October, Halford told AXS TV's Katie Daryl about what PRIEST fans can expect from the upcoming LP: "The same energy, the same vitality, the same determination, and it really is, again, another affirmation of what you love about JUDAS PRIEST. If you listen to any album from PRIEST from 'Rocka Rolla' in the '70s up to the 2000s with 'Firepower' and everything that went on between there, whether it was 'Turbo Lover' or whether it was the 'Painkiller' or '[You've Got] Another Thing Comin'', all of these pinpoints connect the dots of this great 50 years of metal, this journey that we're on. And it ain't over yet, folks, because that means another album and another tour. And we can't wait to keep pouring out the metal, 'cause that turbo power isn't gonna get turned off anytime soon."

In February 2022, Halford was asked by Remy Maxwell of Audacy Check In if he agreed with Faulkner's recent comment that the band's upcoming album will be more musically "progressive" than "Firepower". He responded: "Yeah, the metal is there. But here's the thing: we've tried our best not to replicate anything that we've done. From 'Rocka Rolla' all the way through to 'Firepower', each record has had a distinctive character. And it's tough because fans go, 'We want another 'Painkiller',' 'We want another 'British Steel'.' And [it's, like], 'Dude, we've already done that.'