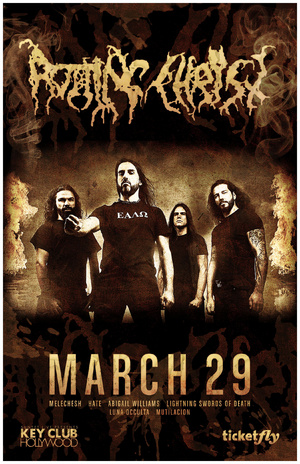 Aniruddh "Andrew" Bansal of Metal Assault conducted an interview with Sakis Tolis of Greek extreme metallers ROTTING CHRIST when the band played at the Key Club in West Hollywood, California on March 29 . A couple of excerpts from the chat follow below.

Metal Assault: Do you think the future direction of the band's music would be similar to how the new album sounds?

Sakis: I have no idea. Every ROTTING CHRIST album is a kind of surprise, so we try to surprise our fans album by album. I don't know how the next album will sound, but it will definitely sound metal and ROTTING CHRIST.

Metal Assault: That album released last year. Since that time, have you had a chance to write any new material?

Sakis: Unfortunately, no. It's a nightmare for me actually, because I'm always on tour and don't have the time. I don't feel like writing new stuff while we are on the road. I wish I could, but I can't. So as soon as this tour is over, I will grab my guitar, I will stay in my place, talk to myself, experience new things and then I'll try to write some new stuff.

Metal Assault: Before starting this interview, we were talking about the fact that you're not allowed to play in India. Can you talk to me a little bit about that? What's going on with that?

Sakis: We have often faced problems because of our name. It also happened in India. We thought it wasn't a big deal, and one guy even offered us to go and play there but after a couple of weeks he told me that I shouldn't do the show because things concerning the religion part are a bit scary. India is a very nice country and we really want to go there, but when you're talking about religions, some territories are very offended. All Indians are not Christians but may be they think we'll bring a bad spirit to them. So it's better to not play there. That also happens in Malaysia, Singapore and many territories. We were supposed to do a tour of Southeast Asia but it was cancelled for this reason.

Metal Assault: Do you think you have to do that a lot more in the U.S. as compared to Europe or South America?

Sakis: Oh, yeah. There is no other way to pull more people. If you have to spread your music, you have to tour. Sometimes you're tired because the conditions here in the USA are very hard. The distances are very far. It's not like in Europe. One month of touring here is like three months of touring in Europe, that's how hard the conditions are. The promoters don't even respect the band sometimes. But we try to keep on playing. This is our destiny. We have played almost 1000 shows, so we will never surrender.

Metal Assault: These days, the album sales are not going great. So do you think touring helps in that regard, as people go to shows and pick up the albums?

Sakis: Yeah, they pick up the albums, but they pick up the merchandise and that's what I care more about. I don't care anymore about album sales. I love music and I have thousands of albums in my home, but other people don't buy them. So the best way is to have people buying a t-shirt of the band.