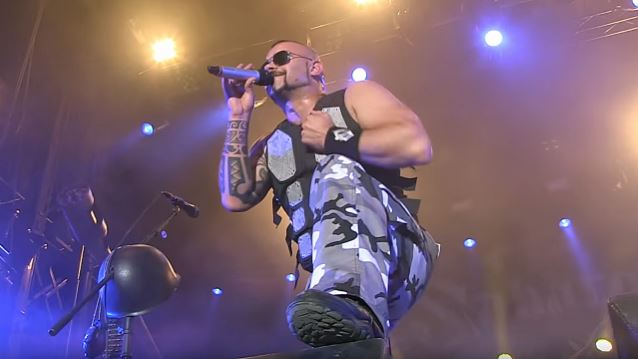 Metal Wani recently conducted an interview with vocalist Joakim Brodén of Swedish metallers SABATON. You can now listen to the chat below.

Asked if making full-blown concept albums is a "winning recipe" for future music, Joakim said: "Well, I don't know. Doing 'Carolus Rex' [2012] in two languages [Swedish and English], following a timeline exactly, is a bit of a bitch, because you're so locked down to what you have to do exactly. And it's both musically and lyrically. The timeline is there, the stories are there; you can't switch around the stories anymore. While as if we do it like we did on 'Heroes' [2014] or 'The Last Stand' [2016], [they're] kind of concept albums, but they're not tight concepts; it's more like a theme. So there's nothing that says that this song has to be before that because of the timeline. So I really like that, because there is some freedom to it."

Joakim went on to say that he still likes the "album format" despite the fact that "it's dying." "We spend a lot of time thinking about the tracklist [of our albums]," he said. "How do we start the album? You wanna surprise the listener with something in the beginning, you want to take it down after a while, you want it to go up again, and that is really a bitch when you're dealing with trying to write music, lyrics and getting a tracklist and adapting it to a story at the same time. So even though it sounds like pretty much the same, trust me, there's a huge difference between making something like 'Carolus Rex' [and] 'The Last Stand'. But I do really enjoy telling stories, though, and I'm pretty sure we will do a proper, hardcore concept album once again in the future. But right now, I'm pretty happy with the format we have on 'Heroes', 'The Last Stand', maybe 'The Art Of War' [2008] as well. I mean, obviously, 'The Art Of War' is [based] on a book [the ancient Chinese military treatise, 'The Art Of War', written by General Sun Tzu in the 6th Century BC] — one song corresponds to every chapter in the book on that album. On the other hand, there's nothing that says it has to be this one, because every song is only corresponding to the military technique talked about in that chapter, and you have several options to choose from. So also that was a bit more open. But we like to stories, and if you tie them together in a good way, that's very nice."

Asked if there are any "famous or infamous wars or battles" that he would like to cover or write about in the future, Joakim said: "Well, there are a lot. We probably have ideas to cover many albums, and we have ideas for themes for several albums as well. In the end, though, we always start with the music and see where that takes us. We have those ideas in mind at all times while writing the music, and then we will see. So, in a sense, the music chooses its subject for us. [Like if you think], 'Oh, we should do a song about Napoleon,' and then you start looking up Napoleon and then you realize, 'Well, this dude is not a song. That's a concept album or at least three songs.' So it's a bit tricky. Sometimes you have a great story and you wanna tell it, but you don't have the right song for it. Sometimes you have a great song but you can't find the fucking subject that suits it."

SABATON's eighth album, "The Last Stand", was released in August 2016 via Nuclear Blast. The follow-up to 2014's "Heroes" was once again produced by Peter Tägtgren (PAIN, LINDEMANN, HYPOCRISY).