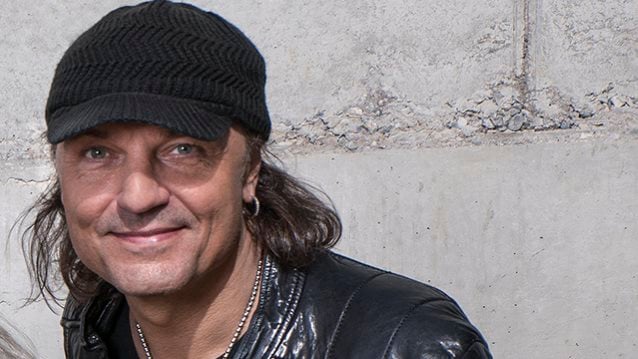 SCORPIONS guitarist Matthias Jabs was interviewed by Adevarul prior to the group's June 12 performance in Bucharest, Romania. The full conversation can be seen below. A few excerpts follow (as transcribed by BLABBERMOUTH.NET):

On whether he thinks the message of "Wind Of Change" still applies today:

Matthias: "Of course, we all had our hopes flying high regarding a peaceful world, but I came to the conclusion [that] it's an illusion to think about a peaceful world. World peace will never exist because you and I, we have conflicts in ourselves. You have conflicts with your partner in life, your brothers, your family, all of the village... go to the big cities, go to another country with different languages and cultures, different religions, and hell breaks loose, especially as far as religions go. Forget it – we will never have world peace. It's sad, but I have to admit it. It's no possibility."

On whether there are any countries left on SCORPIONS' "bucket list":

Matthias: "We played Serbia [the] day before yesterday. We were supposed to play there last year, and finally we did it, [for] the first time. Same with Slovenia, and we are going to New Zealand and Australia. We played Australia one time before, but we are going to New Zealand [for the first time]. We played China; we go there again, and there are of course many countries we haven't played. I haven't counted it, but we've played over 80 countries so far. I think we are on top of the list of the bands that are most represented worldwide, more than anybody. Hopefully can we can conquer the African continent one day."

On how it will feel to serve as a support act on that tour of Australia and New Zealand, when SCORPIONS will support DEF LEPPARD:

Matthias: "It reminds me of 35 years ago. It's lovely. We had DEF LEPPARD as our support in the U.S. when we started out in 1980. We kept in contact and we are still great friends. It shouldn't be a problem. It's tough to follow us, to be honest."

On the signature hats that he and vocalist Klaus Meine wear on stage:

On the prospect of changing their setlist:

Matthias: "You should talk to our singer about this. I can play anything, but being 70 years old, he has certain restrictions regarding the old recordings. If you remember the original key we recorded in, it was so extremely high, it was already difficult to do for him, never mind any other singer in the world. To record 'Blackout' in the original tuning or 'No One Like You' and those songs from the early '80s, brutal stuff. Sounds fantastic, but no one, including Klaus, would reproduce this for an extra 40 years, being on tour, playing 150 shows a year. No way. He has to save his voice; otherwise, we would stay home. I know the fans want everything, and they deserve everything, but we have to find a compromise among the fans and ourselves. The setlist cannot be a wish list for everyone; it has to be the top songs we have. A few have to be excluded because it's just not possible to do it. Then again, we have the KISS and AC/DC fans — they listen to the same set since 20 years. We are more flexible than that. We change things once in a while."

On whether SCORPIONS will ever follow the lead of IRON MAIDEN and embark on tours that spotlight different chapters of the group's history:

Matthias: "That would be a fantastic idea. I have to talk to my colleagues about that. We have plans until the end of this year, and no other plans beyond that so far."

On whether there's a SCORPIONS song he'd like the group to play live again:

Matthias: "I always love — and we only do it in the U.S., because it's our biggest hit there, bigger than 'Rock You Like A Hurricane' almost — 'No One Like You'. It's one of my favorite songs in the SCORPIONS set, if not the best."

On the significance of "Make It Real", the live performances of which feature a projection of the flag of the country in which the group is performing:

Matthias: "The song is not that special; it's more the idea of greeting the fans in the particular country we're playing. Lately, apart from the U.S. and Germany, we play one or two shows at most per country, so we like to greet our fans in this particular country. It's just to honor our audience. We just say, 'Thank you so much,' and the people seem to love that we honor them. It could be in any other song, [but] it has to be in the second song. We could change the set list. It doesn't have anything to do with 'Make It Real'."

On the group's upcoming "Once In A Lifetime" concert in Athens, Greece:

Matthias: "There's a national orchestra playing in front of us. We play the spectacular, 100 percent marble stadium that holds 100,000 people — take a few off, because we need to put our stage in. In Athens, it's the antique Olympic Stadium built in 1896. [We're] the first rock band ever [to play there]. I think it has to do with the permission to play there, [but] the promoter invited the national orchestra. It has to do with some politics. I don't know what we [will] do with them. We've played with orchestras [like] the Berlin Philharmonic and others before. So far, there is no plan to play with them [in Athens], but we might spontaneously say, 'Okay, if you have the right [musical] charts for yourself, we are able to play our music with an orchestra.' We've done it many times. If they are capable, I'm in."

SCORPIONS will perform a handful of American shows with QUEENSRŸCHE in August and September. They mark the group's first U.S. shows since the band canceled the final five dates of its fall 2017 tour due to Meine's "severe laryngitis."