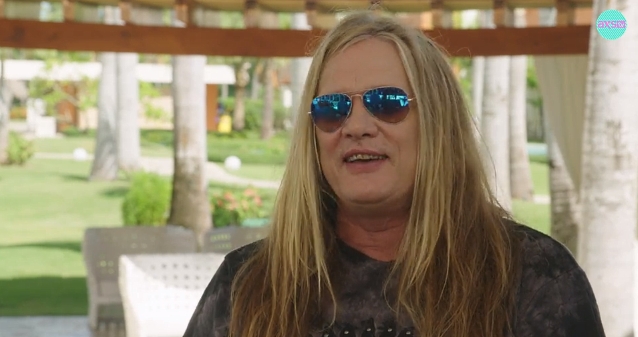 Former MTV VJ Alan Hunter conducted an interview with ex-SKID ROW singer Sebastian Bach at the 80s In The Sand music festival, which was held last November in the island paradise of Punta Canta, Dominican Republic. The chat, which will premiere this coming Sunday (April 14) as part of AXS TV's all-new series "80s In The Sand", can be seen below. A couple of excerpts follow (transcribed by BLABBERMOUTH.NET).

On his appreciation for all styles of music:

Bach: "I like most music — I really do. When you talk about '80s music, or '70s music, this was before we had Pro Tools and technology, and the fact of the matter is in the '80s, and before, we had to learn how to make these sounds come out of our bodies. And the melodies of bands like ABC or DURAN DURAN, these melodies are incredible — like, really — and they last the test of time. Because you couldn't just phone it in on your phone and tweak it up; it was a different time. This was back when 'cut and paste' meant 'cut' and 'paste' with the scissors and some glue. And that's what we did. So I think that's why the music lasts the test of time."

On how '80s artists had to be original in order to stand out:

Bach: "People like to talk about the image of the '80s, but you had to have your own style; you couldn't just be like everybody else. When I joined the band SKID ROW, [Jon] Bon Jovi took us under his wing, and he's, like, 'Sebastian, sometimes you sing like Vince Neil. Sometimes you sing like [Ronnie James] Dio. Sometimes you sing like [Rob] Halford. You have to find your own sound right now.' And when somebody says that to you, it's, like, 'Oh my Lord.' But that's the way it was then. Like, Bon Jovi didn't sound like Sebastian, didn't sound like Tom Keifer. Bret Michaels… we all had our own identifiable sound. Every guitar player did, every drummer — everybody had their own personality, and I think that really is something different from now."

**UPDATE**: After this BLABBERMOUTH.NET article was posted earlier today, Bach took to Twitter to clarify his comments. In reference to the BLABBERMOUTH.NET headline "SEBASTIAN BACH Says All '80s Rock Bands Had Their Own 'Identifiable Sound'", Sebastian wrote: "Never said this headline. The idea was to have your own sound but of course not all bands achieved that"

Bach is about to sign a new record deal for his upcoming solo album. The disc, which is not expected to arrive before late 2019 at the earliest, will feature contributions from several well-known guitarists, including John 5 (ROB ZOMBIE, MARILYN MANSON),Steve Stevens (BILLY IDOL) and Orianthi (ALICE COOPER).

Extended Interview with Sebastian Bach | 80s In The Sand

His favorite hair-care products, the best items in his record collections, and why he loves vinyl... Sebastian Bach spills all in this 80s IN THE SAND extended interview! 👇

Never said this headline. The idea was to have your own sound but of course not all bands achieved that

That he did. Tons of fun talking with @sebastianbach Such a smart chap. And a smart ass too! https://t.co/iHLOLZVxun