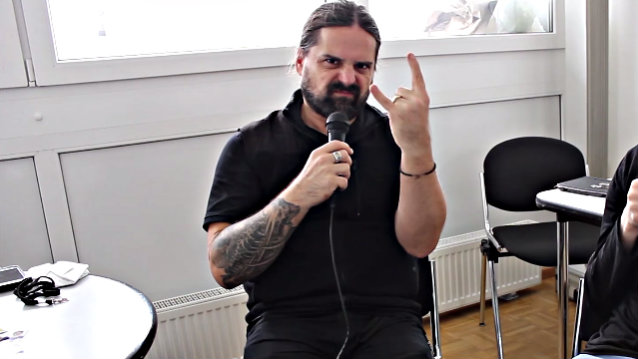 Metal-Heads.de conducted an interview with guitarist Andreas Kisser of Brazilian/American metallers SEPULTURA before the band's March 4 concert in Essen, Germany as the support act for KREATOR. You can now watch the chat below.

Asked if there are plans for SEPULTURA to return to Europe in the near future for a headlining tour, Kisser said: "We have a plan to come back to Europe at the end of the year, doing our own tour. And pretty soon we're gonna have news about it. We're preparing something very special, very different — something we never did before — and hopefully it will work great. So be aware that we will be back."

Kisser also offered an update on the official SEPULTURA documentary which has been in the works for several years. He said: "It's finally done, actually. The director is following the band the last seven, eight years almost. He went on different tours — he went to Indonesia, Europe, States, everywhere with us — and also [collected] interviews with a lot of different people, musicians and roadies, and I think it will be very interesting to show how it is to be a part of a band like SEPULTURA and to have a family. Not only for the metal crowd, but for the normal crowd, to see the trajectory of a band from Brazil and thirty-three years of a career and stuff. I'm very excited about it. It took a while, but there's no other way to do something like that. But hopefully now in May or in April, we're gonna have more news and a date for the specific official release."

SEPULTURA will join veteran San Francisco Bay Area metallers TESTAMENT on a North American tour in April. Additional support on the trek will come from PRONG.