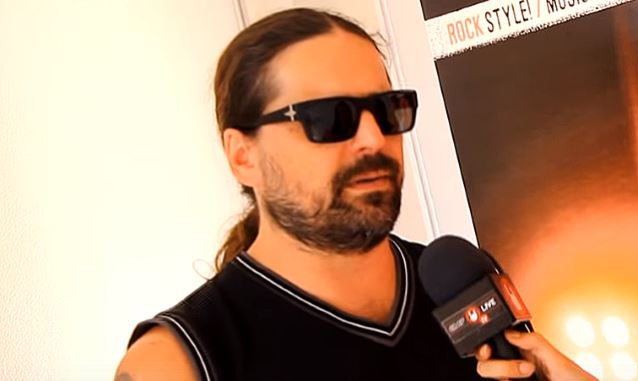 Spain's EMP Live TV recently conducted an interview with guitarist Andreas Kisser of Brazilian/American metallers SEPULTURA. You can now watch the chat below. A couple of excerpts follow (transcribed by BLABBERMOUTH.NET).

On the Brazilian influence in SEPULTURA's music:

"We were influenced by music from outside Brazil first — European bands and American bands — and we hated all the stuff that we listened to in Brazil, because we grew up very radical and only listened to metal. And as soon as we started really playing in different places, first in Brazil and then South America, and then we came to Europe, and we started knowing the world, we saw Brazil as a very special and unique place. So we started using the percussion, the melodies of Brazil, talking about Brazilian things, not only the beautiful part of it — especially the corruption and violence in the streets in a city like São Paulo, for instance. I mean, we use Brazil in a very natural way. First we denied that part and then we embraced that part very much. And still nowadays, it's a big part of our sound — the Brazilian groove, the percussive part. Derrick [Green, vocals], [who] is eighteen years with SEPULTURA now, he's exploring a lot more the percussion on stage. And I think that's why… I think we found our own sound. Of course, we were influenced, like I said, [by] bands like SLAYER, METALLICA, ANTHRAX…"

On SEPULTURA's influence on other bands:

"I think 'Roots' was a very special album that really influenced a lot of people, including bands like DEFTONES and SLIPKNOT. Dave Grohl [FOO FIGHTERS, NIRVANA] just commented recently again about the album. He always really embraced it as one of the great musical works, definitely from Brazil. And it's great to have that kind of mark. I think every artists really looks for that — to have kind of an original sound or original signature that is gonna put them apart. And we have the privilege to travel the world, and we express our feelings very honestly in our music. We don't try to wear any masks or to try to cheat anyone, to fake [it]."'

On addressing the SEPULTURA "haters," not just the fans:

"They are our fans. You know, the haters are our fans. Because they love a part of the [SEPULTURA] career, in which me and Paulo [Xisto Pinto Jr., bass] were involved. It's like thirty years and I don't know… five different formations [of SEPULTURA] — from Jairo [Guedz, guitar] to myself, and then Derrick and then Jean Dolabella [drums] and Eloy Casagrande [drums]. Of course, regardless of the formation, SEPULTURA always have a different album from each other. If you [compare] 'Schizophrenia', which is my first album with SEPULTURA, back in 1987, to 'Roots', which is the last album that Max [Cavalera, guitar/vocals] did in 1996, it sounds like a different band. We evolved a lot, from 'Beneath The Remains' to 'Arise', [from] 'Arise' to 'Chaos A.D.' and 'Roots', they're very different albums from each other. Very different. 'Chaos A.D.' and 'Roots' almost sound like a different band, with many different experimental stuff and everything. And we kept that spirit 'till nowadays. That's why we're still here, I guess. And it's something that we respect a lot everybody that comes to the band. We don't try to create clones or try to follow formulas. If I'm in the band, I'm gonna put everything there which I did since Day One. And, you know, when Derrick came in, a totally different singer, visually and background, he has a different way of playing guitar and stuff, we used those elements; we didn't force him to be like Max or anyone else. Same with the drummers and everything. So I think, like I said, it's very honest. That's why we're still evolving."

This is not the first time a member of SEPULTURA has collaborated with DarkSide Books. Back in 2013, Kisser wrote the foreword to the BLACK SABBATH biography "Destruição Desencadeada".

SEPULTURA's latest album, "The Mediator Between Head And Hands Must Be The Heart", came out on October 29, 2013 via Nuclear Blast.