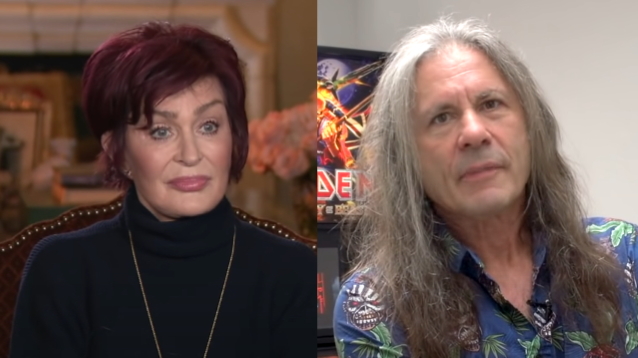 Sharon Osbourne has blasted Bruce Dickinson as a "fucking asshole" who is "jealous" of Ozzy Osbourne.

The IRON MAIDEN singer was involved in a verbal battle with Ozzy's wife and manager more than a decade and a half ago when his band was pelted with eggs, lighters and ice during the final performance of its headlining performance on the Ozzfest tour.

Sharon reportedly ordered interference with MAIDEN's PA system, delayed the stage entrance of the band's mascot Eddie, and even encouraged the crowd to throw bottles at Dickinson because she took offense to remarks she said the singer made concerning the quality of the tour's sound system and criticisms he made about Ozzy. Among the comments she objected to was Dickinson telling fans during MAIDEN's set that they would never see his band featured "in a reality show," presumably a reference to the MTV series "The Osbournes" and "Battle For Ozzfest".

When Consequence recently interviewed Ozzy, the site asked the metal icon if he felt he was underrated as a singer, compared to other legendary vocalists like Dickinson, Rob Halford and the late Ronnie James Dio.

"Bruce Dickinson is a great singer, but as a person, I've worked with him, and he's not very nice," Ozzy said. "Ronnie James Dio is no longer alive. He was a great singer. I didn't really know him so well. I'm not one of these guys who says many things about people. The truth is the truth. I met Ronnie James Dio a couple of times. He took my [BLACK SABBATH] gig. But at the same time, I can't complain because I did great on my own."

Ozzy continued: "But I don't sing for a judge. I sing for my fans. If my fans don't buy my music, that would tell me my singing isn't any good anymore, but they're still buying my records. I'm my own worst critic. I don't rate myself more than Ronnie James Dio or Bruce Dickinson. That's not my gig. I don't care. I have fun doing what I do. My goal is to turn my fucking audience on. And that's what I try to do. I'm not interested if someone thinks I'm a fucking joke. That's fine. That's their opinion."

Sharon, who was interviewed for the same Consequence cover story, was far more scathing in her remarks, saying: "Bruce Dickinson is a fucking prick. Well, no, he's not a prick because a prick's nice. He's a fucking asshole. Because the situation is he was on a tour called Ozzfest. And Ozzy Osbourne was paying him every night to perform. He accepted the gig. He knew what he was doing. He accepted the gig. And every night he would go onstage and say bad things about Ozzy. And the crew and everybody in all the other bands would be like, 'Are you letting him get away with it?' And I'm like, 'I sure am.' But the last gig was [just outside of] L.A. And I thought, 'You motherfucker, now you're gonna get it.' And so I had about 20 people in the audience and a lot of them were nurses from Cedars Sinai, because I had cancer at that time. And they were all my chemo nurses. And they all came down, and they fucking pelted the shit out of him. And my thing is, you play, you pay! And the thing is, if you're being paid to do a gig, but you don't like the person, then fuck off. But don't stay, take the money, take all the good that's coming to your band through being on a festival, doing 24 shows and still slagging the person that's paying you. It's like, 'No, that makes you a fucking asshole.' And he is. And he's never apologized, he never even went up and said hello to Ozzy. The thing about him is that he is just so jealous. And always has been of Ozzy. And that's his problem."

Sharon continued: "Because the thing is about Bruce Dickinson, he's hugely successful. He's got a great fan base, a great fan base that have been loyal. The band are great guys. All the band are great. And they do great. You know, they're a great band, you can't take it away, and neither would I take that away from them. But the thing about Bruce is, he is unknown to the public. Bruce Dickinson could walk into anywhere and nobody would know who the fuck he is. Do you know what I'm saying? He's a faceless singer to the general public. People aren't scrambling to get him for an interview. And the thing is, he's not interesting. But the thing is, Ozzy is original and Bruce isn't and that's what eats Bruce away."

In a 2017 interview with NME, Dickinson downplayed the friction between him and the Osbournes, saying: "It's a complete storm in a teacup. I grew up listening to early SABBATH with Ozzy. Ozzy and SABBATH are icons so that's that, end of story. The fact that I don't like reality TV shows, well, I'm not gonna offer an olive branch to the Kardashians either," he added.

In a 2010 chat with The Quietus, Ozzy defended his wife over the Ozzfest incident, saying: "Unbeknown to me, every night [on the Ozzfest tour, Bruce] was going on stage slagging me off. And that wasn't fair. If he didn't like the fuckin' tour, he should have said, 'I'm jumping [off] the fuckin' tour,' but to go on stage and fuckin' slag me off for no reason… I'd never said a fuckin' bad thing to him. The bass player [Steve Harris] came round at the last gig and said, 'I'm sorry about Bruce,' and I'm like, 'What the fuck are you talking about?' Nobody had told me, you know. I said, 'You know what? I don't understand what the fuck you're talking about here.'

"And so, I mean, Sharon got pissed off… it was nothing to do with me. I suppose Sharon got pissed off. I'll back my wife up to the hilt, but I didn't know what was going down. But you know what? [MAIDEN were getting] a few fuckin' quid out of that Ozzfest. If you've got something to talk to me about, be a man. Come to my face and say, 'I think you're a fuckin' asshole.' Don't be a fuckin' idiot. It's so pathetically childish.

"Unfortunately, the rest of the band had to suffer: I suppose they were pissed off with him. But it's wrong: I've never, ever, ever spoken to the guy… No, I tell a lie, one night they were about to go on stage and I didn't know anything was going down, and I said to them, 'Have a good show, guys.' But I don't like all that shit going down. If you don't like me, just say 'I don't like you, I'm doing this festival but I think you're a cunt.' That's all right. But to go on my stage and start slagging me off — that ain't fair. They weren't fucking slagging me off when they got paid every fucking night."

He added: "To this day I don't understand what the fuckin' beef was. I just don't get it. To go on the Ozzfest and slag [people] off, that's crazy. I really think he needs a fuckin' psychiatrist if he does that, he's fucking nuts. It's an irresponsible fuckin' thing to do. Sharon must have got pissed off with this cunt, you know."