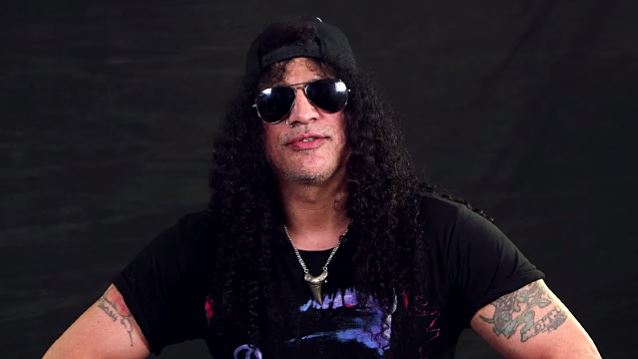 Asked to weigh in on Gene's comments, Slash told Ultimate Classic Rock (see video below): "I think probably where Gene's coming from is that the music business itself is not catering to rock and roll at all. And if you're aspiring to be a guitarist or a drummer or a singer in a rock band and, sort of, make your way up the ladder, the obstacles are much bigger than they were when I first started. There's a lot less opportunities in the record business, to get a record deal and get your record out there. There's not a lot of radio play for it. But, that said, the rock and roll audience is rabid. [It's] huge and just as alive and kicking as it ever was. So, I get what [Simmons is] saying, but I also think that it's really great to, kind of, just sort of, separate the men from the boys, where if you're really passionate about the kind of music that you wanna do and you're not looking at it from a dollars-and-cents point of view, but you just wanna create new music and somehow go out there and play live and get it out there, that passion for it has to be honed in and it has to be real. It can't be about buying cars and getting laid and all the other perks that go along with making a lot of money. It's gotta be about the music, and I think that's pretty healthy."

"World On Fire", the third album to be made available under the Slash solo banner, is likely to sell between 25,000 and 28,000 copies in the United States in its first week of release, according to industry web site Hits Daily Double. The estimate was based on one-day sales reports compiled after the record arrived in stores on September 16 via Slash's own label Dik Hayd International distributed through Roadrunner Records (Europe, Middle East, Africa and Latin America).. The chart will be unveiled on Wednesday, September 24.