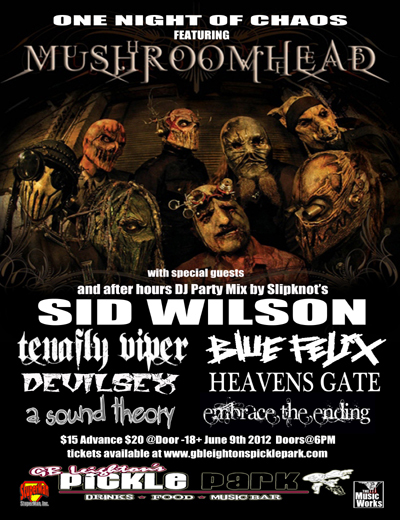 According to Twin Cities Metal, two members of MUSHROOMHEAD joined SLIPKNOT's Sid Wilson on stage this past Saturday night (June 9) during Sid's DJ set at G.B. Leighton's Pickle Park in Fridley, Minnesota. Both MUSHROOMHEAD and Sid Wilson were booked on the same bill for this one night only.

"Sid took to the stage after MUSHROOMHEAD, and MUSHROOMHEAD declared at one point during their set, 'MUSHROOMHEAD, SLIPKNOT in the same room, acting like decent people," reads a posting on the site. "There is no motherfuckin' beef at all!' As Sid's set started with him alone behind his turntable kit, two members of MUSHROOMHEAD rushed onto the stage to play their 'water drum' kits during the first song."

Video footage of the Sid Wilson/MUSHROOMHEAD performance can be seen below.

According to The Pulse Of Radio, SLIPKNOT and MUSHROOMHEAD have always had beef but SLIPKNOT singer Corey Taylor said at the end of last year that the groups would be willing to put their issues to rest for a possible tour. During a question-and-answer session on his solo trek, Corey also said that not only is SLIPKNOT/MUSHROOMHEAD tour possible — but he wouldn't mind getting MUDVAYNE and GWAR on board as well.

Corey said, "My problem has never been with that band, my problem was with their fans at the time. I would welcome it. I'd love to do something like that, you know. Especially now. I think it'd beautiful to put something like that together and just see what fucking happens — SLIPKNOT, MUSHROOMHEAD, GWAR and fucking MUDVAYNE. Because if it's one thing I've learned, you don't hold on to stupid shit, you let it go."

Reportedly, there had always been animosity between the two groups because they are both heavy bands who wear masks. However, the real hatred reportedly started in 2002 when SLIPKNOT was playing in Cleveland and fans threw things at the group while on stage. SLIPKNOT believed that MUSHROOMHEAD put the fans up to it.

SLIPKNOT will headline the Rockstar Energy Drink Mayhem Festival this summer in the U.S., beginning on June 30 in San Bernardino, California.