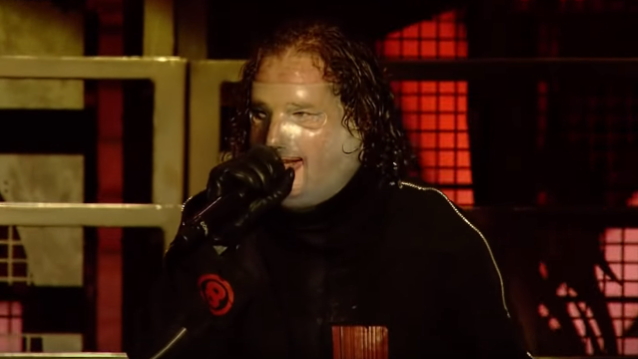 SLIPKNOT's COREY TAYLOR: 'I'm Not The Brightest Bulb In The Box'

In a brand new interview with BBC Radio 6 Music presenter Mary Anne Hobbs, SLIPKNOT and STONE SOUR singer Corey Taylor spoke about how he underwent emergency spinal surgery in 2016 when it was discovered that he had been walking around for years with a broken neck. He later said that he thought the issue might have originated way back in 1999, when he took a fall from an Ozzfest second stage.

"I'm not the brightest bulb in the box, let's put it that way," he told BBC Radio 6 Music. "The only thing that I can figure out where it came from [is] I fell offstage in '99 and landed on my head — fell five feet [and] landed on top of my head. And they think what happened is it compacted my C5 and [C6, fifth and sixth cervical vertebrae of the spine]. And because I was 25 and indestructible, I was just, like, 'Whoo! Okay, I can move everything. I can still sing. Here we go!', and just continued on. And what happened was over the years — obviously, being in SLIPKNOT, it's a little more abrasive than being in any other band — it just kind of exacerbated the injury to the point where the bone was growing into my spine. And I still have a bruise on my spinal cord that you can see on X-ray, which is insane. So, they jacked those up, they shaved the bone back, they replaced the disc that had been destroyed."

According to Corey, he was in "bad" shape prior to going under the knife."I was losing strength and sensation in my right side," he said. "I was having all these things. I couldn't keep my balance. It was crazy. But, luckily, I caught it, and I had the surgery, and then went back on the road, like an idiot — I think we postponed the tour by two weeks. And the thing was, 'Okay, I can walk. I can sing. I just can't headbang.' I put on a neck brace to keep myself from headbanging. [Laughs] [Because hadbanging is] such a part of my performing, when you're physically so in tune with the way you present, it's almost automatic. So, it was really kind of me putting myself in check."

Corey also briefly addressed the fact that he underwent surgery on both his knees last May. He said: "[That's] a whole other chapter. I was, like, 'Could things just stop breaking down, please? All right? I have plans. I don't know if you noticed that, but we have a whole schedule going on.' Yeah, it was ridiculous."