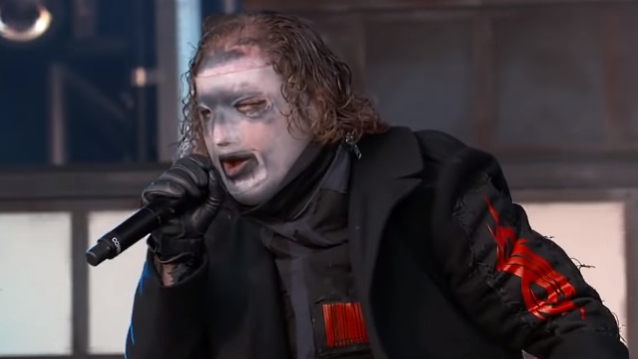 SLIPKNOT's COREY TAYLOR On His New Mask: 'I Wanted It To Feel Like It Was Something That Was Created In Someone's Basement'

Corey Taylor spoke to Kerrang! magazine about SLIPKNOT's new costumes, which were unveiled last week to coincide with the release of the band's sixth studio album, "We Are Not Your Kind", due on August 9 via Roadrunner.

Corey worked on his new mask with special effects legend Tom Savini, whose extensive career in the film industry and especially the horror genre dates back to the late 1970s, including in such films as "Friday The 13th", "Dawn Of The Dead", "From Dusk 'Til Dawn" and many others.

Regarding the inspiration for his new mask, Corey said: "I'm reminded that even though you want the best for people, sometimes you'll get the worst. I've been kind of made to feel like a villain, in a weird way. Which is fine. It was inevitable, and it doesn't really bother me much. But, for a little bit, it did. I've always tried to be a good father, be a good man, be a good person. I went through some shit a few years ago, and in that time a lot of people had a reversal of opinion on who I was. Maybe it was because they were tired of hearing my name [laughs], which is so fucking true — even I get to the point where I'm tired of hearing my own fucking name."

He continued: "I said, 'Okay, if you want a villain, you'll get a fucking villain.' My vision was about trying to create something uncomfortable — not only for me to wear, but for people to look at. I wanted it to feel like it was something that was created in someone's basement — something that was made specifically to fuck with people. It's the representation of public opinion turning on a dime — they want to tear people down for the way they live, even if they don't really know them. It's been liberating to embrace that side and be, like, 'Fuck you. I really don't give a shit what you think about me, so here's this!'"

The members of SLIPKNOT performed with their new masks for the first time last Friday (May 17) when they appeared as the musical guests on "Jimmy Kimmel Live!" The band played two songs on the show's outdoor stage in front of a standing-room-only crowd.

"We Are Not Your Kind" was once again recorded at a Los Angeles studio with producer Greg Fidelman, who engineered and mixed SLIPKNOT's 2004 album "Vol. 3: (The Subliminal Verses)" and helmed ".5: The Gray Chapter".

Slipknot: Inside We Are Not Your Kind – the only interview. Pre-order this week’s issue – out Wednesday, May 22 – and get it delivered straight to your door, anywhere in the 🌍: https://t.co/qQJos9WNj5pic.twitter.com/uQwVRt4xZh