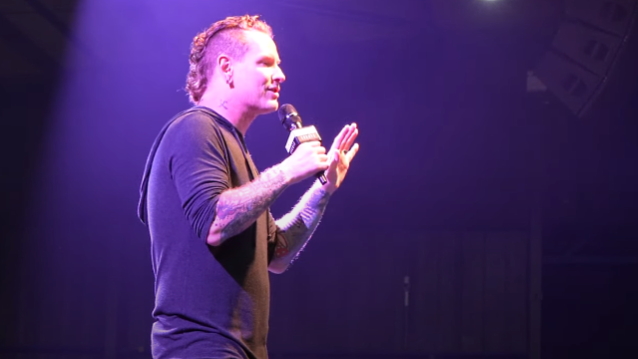 During a question-and-answer session at this year's "For The Love Of Horror", a horror fan convention which took place October 22-23 in Manchester, United Kingdom, SLIPKNOT frontman Corey Taylor spoke about his upcoming novel. He said (as transcribed by BLABBERMOUTH.NET): "I actually started [work on it] about a year ago… The novel… I won't give too much away because I don't wanna get too much in 'cause I'm still trying to map it out; I've only written the first three chapters. But it has to do with a psychic, a witch, a serial killer and a demon. And yeah, it's as cool as you think. And it's weird — the psychic develops this kind of psychic bond with the serial killer who doesn't realize he's psychic. So it's an interesting twist. And if I do it right, I have a plan to use the central characters in several other books. So if the first one doesn't suck, we'll see what happens… But it very well could suck ass. However, I'll at least go, 'All right. Well, we're not doing novels anymore.' But that's the thing — you try it. If you have a taste for it and you develop a talent for it and if it's good and if people dig it, then you can carry on and see how far you can take it. But if people go, 'Yeah, you shouldn't do that anymore,' I'll listen — I promise I'll listen. It's only because you guys go and see my movies that I actually act as well. So there you go."

Last March, Taylor said during an appearance on an episode of Doug Bradley's "Down To Hell" show that he "put a pause" on writing books about five years ago because his last book, 2017's "America 51" "almost killed" him. He explained: "It was such a gnarly, gnarly experience… That was very political. And I won't bore anybody with my partisan crap, but it was just the lamentations of somebody who could see that we were in for a very long four years. When I wrote that, it was definitely something I needed to say. And I was, like, 'You know what? I'm never doing another politics book ever again. I don't even care.'"

A year and a half ago, Taylor told Matt Pinfield of 95.5 KLOS's "New & Approved" series that he was "starting to get the itch" to write his fifth book. "I've got a concept in mind," he said. "It has to do with social media and the age that we live in — the 'outrage' age. And it's starting to really kind of form in my head. I may actually write it soon. Because it's really kind of out of control out there right now.

"I was reading about how Gen Z is trying to cancel Eminem because of one line that was in a Rihanna song that he did with her," he continued. "And I'm just, like, is that where we are right now? I mean, at this point, you're talking about the Salem witch trials. You're talking about America in the '20s where the KKK was a political force. You're talking about complete condemnation without context or any rationalization for an action like that. And to me, that's [what's] most dangerous — when the mob decides that you're gone. That is Caesar at the Colosseum, for god's sakes. That's when it's dangerous. The level of censorship that we're starting to see… And I'm not saying that certain things haven't been said that easily offend people. However, the flipside of that is that you can't even make a joke anymore — even in the cleanest of situations. [People] completely turn on you. And there's not one hint of satire, there's no hint of irony — it's just all-out rage, and it's all through this [shows his smartphone]. And that's when it's really greedy, that's when it's really dirty. It can't be that way. If we can't have a conversation, how the hell are we gonna communicate. And if we can't understand the difference between metaphor and complete reality, then we're in real trouble. And that's where I'm leaning with the book."

Roughly one-third of "America 51" was dedicated to Corey's derision for President Donald Trump.