SOULFLY's ZYON CAVALERA: 'Salty' MARC RIZZO Is 'Trying To Drag My Family Name Through The Mud And Play The Victim'

SOULFLY drummer Zyon Cavalera has blasted his former bandmate Marc Rizzo, saying that the guitarist is trying to drag the Cavalera "family name through the mud and play the victim."

Although Rizzo's departure from SOULFLY wasn't officially announced until August 7, it was widely speculated that he was out of the group two days earlier when it was revealed that FEAR FACTORY's Dino Cazares will play guitar for SOULFLY on the band's upcoming U.S. tour, which kicks off on August 20 in Albuquerque, New Mexico.

Rizzo addressed his split with SOULFLY in a new interview with Aftershocks TV. He said (as transcribed by BLABBERMOUTH.NET): "I haven't been happy in SOULFLY for a long time. The fans know what's up, man. It's all over the message boards.

"I always had a lot of love and respect for [SOULFLY leader] Max [Cavalera], but these last couple of years have just been very difficult. It's no secret that he's not really playing guitar up there on stage, at least to the level that he should be. The fans are talking about this. They've been talking about this stuff for years. It's all over the message boards, how people just aren't happy. And I also was not happy, as a fan and also playing in the band. So it was a long time coming. And then this whole COVID situation, the lack of support this year, it really just opened up my eyes that, 'You know, man, now is the time.' It's just not worth my time anymore. I'm not getting out what I'm putting in. And, again, it's all documented. You go on YouTube and you pull up any video, you can see it right there with your own two eyes.

"Whatever Max is saying in the press, listen, he can say whatever he wants to," Marc continued. "He's been doing that kind of stuff for years — against [his former bandmates in] SEPULTURA and old members [of SOULFLY]. And the fans know who I am. I hang out with all the fans. I'm very, very accessible after all my shows. No big deal. It's water under the bridge for me."

Asked if it's going to be difficult for him financially to rely completely on his solo projects in order to get by going forward, Rizzo said: "I've been doing my solo project since 2005 [or] 2006, and that's what got me by in between all the SOULFLY and CAVALERA CONSPIRACY tours. I was never on a retainer — SOULFLY never did retainers, which is kind of an industry standard for bigger bands. There was never a retainer, so for me, it was never an option to get a retainer. So I went out and just started doing my solo gigs, and that's how I got by all these years when SOULFLY would decide to just randomly say, 'Hey, we're taking seven months off,' and you wouldn't get any notice. That would happen all the time. And so then I would go out and book my solo stuff. It would be on a smaller level, but I still was able to get by and do my thing. Which I'm very grateful — I'm very grateful to the fans that they've always supported me and came out to my solo gigs. It's obviously not as big as the concerts that I've played with SOULFLY, but I'm fine with playing in front of, like, 20 people at a small bar… But I'm not gonna sit here and tell you that this last year during COVID that the band I was in for 18 years was supportive, 'cause it's not true. It's just facts. There's a lot of things that are leaking now online that showcase that. It is what it is, man. But I plan on just moving ahead and staying positive and try to keep it all positive for me."

Zyon, who is the 28-year-old son of Max and his wife and longtime manager Gloria Cavalera, touched upon some of Rizzo's recent comments in Instagram Stories earlier today (Wednesday, August 18). He wrote: "This is for anyone who doesn't understand how the music business works. During the pandemic, independent contractors [most musicians] were able to receive grants and such thru the govt. My bands guitar player didn't file that paperwork for some reason and now is trying to drag my family name thru the mud and play the victim. There's alot of people buying into that.

"Now that the dust is settled if anyone has any questions feel free to DM me LOL.

"Dude got salty cuz he didn't fill out the paperwork and blamed us for it," Zyon added. "And we paid him a large sum of money in February 2021 to record a new record. So how did we not help him thru the pandemic?"

Earlier this week, Max told Metal Kaoz that Marc has been spewing out "lies and bullshit" in some of his recent interviews regarding his exit from SOULFLY. "All these accusations — it hurts," he said. "It hurts to hear. After everything that we did for him, which was a lot — we put him on all the records and always took really good care of him, always really, really gave good treatment to him. To hear him backstabbing us like that, it's just not nice. He's obviously trying to get fans to be against me and make him the victim… It just sucks to hear all that. It definitely hurts me when I hear all these accusations that I know are lies and bullshit; it's all fabricated by his crazy mind. I don't know. It's a strange situation." 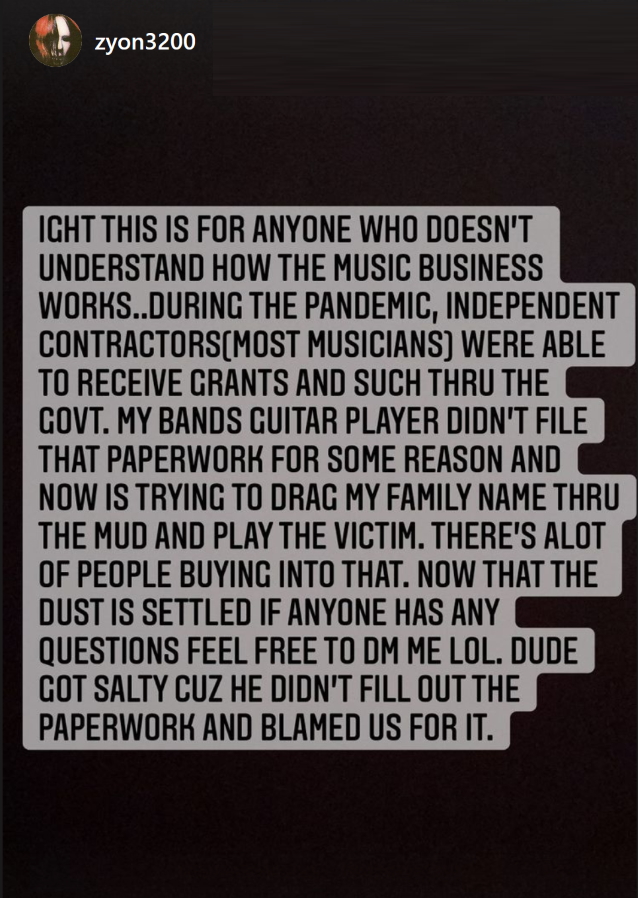 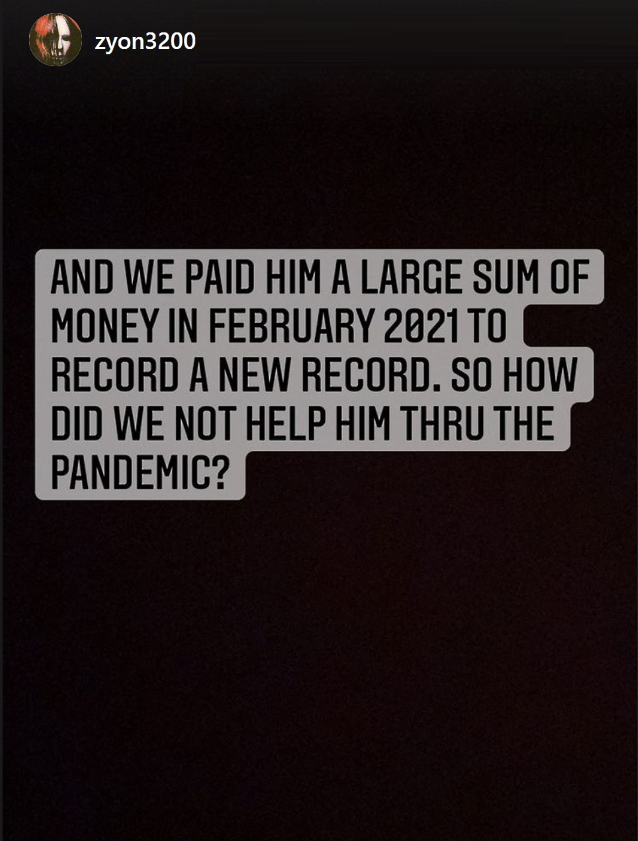