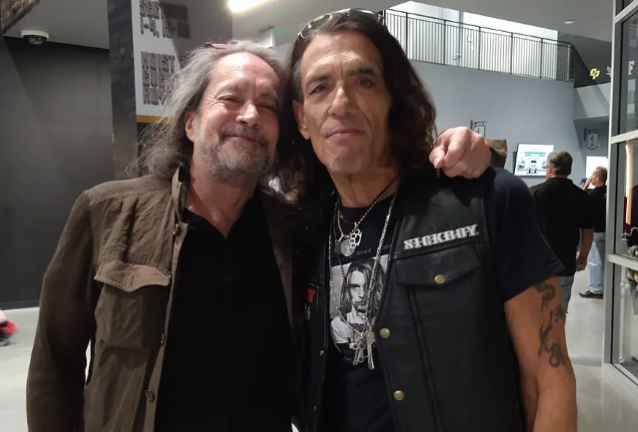 RATT singer Stephen Pearcy spoke to Shawn Ratches of Laughingmonkeymusic about his upcoming collection of music, "Legacy", which is due in early 2023 via Golden Robot Records. According to Stephen, the set will include never-before-heard RATT songs, solo tracks, re-recordings and new versions of previously released tunes.

Stephen said (as transcribed by BLABBERMOUTH.NET): "I'm putting the finishing touches on 'Legacy', and the problem I was having was a good one, because there was so much music to choose from through my history of music and catalog — quality stuff, not just hissy-hissy scratchy LP or cassette, whatever form it was recorded. We're taking time with it. It's kind of a story, actually, because there's some stuff like interluding into songs, and you hear us discussing rearranging 'Wanted Man' — early stuff, like in 1983 or [198]2. I mean, it's crazy. But it's all good. My problem was picking songs. Now, I've got it, so there'll probably be a part two."

He continued: "Not most, but some of the stuff that I've got were from bootleggers. And I'm the best bootlegger out there for RATT, or anything that I do, so I pretty much found the same thing but in better quality. Going back to, like, in the '80s, you'd get these double-album live bootlegs in Germany and Japan. I've got all those."

Pearcy also talked about a possible collaboration with former OZZY OSBOURNE guitarist Jake E. Lee. Lee actually began his career as a member of singer Pearcy's MICKEY RATT, which became better known as RATT after a name change in the early '80s.

"I have some tapes with Jake all over the place," Stephen said. "A lot of people have always asked if we ever wrote a song when he was in the band. Well, we actually did co-write a song together, and I've got it, and it's going on 'Legacy'.

"I just ran into him — it's the weirdest thing — I ran into him at Alice Cooper here in [Las] Vegas [where we both live]," Pearcy continued. "And it's, like, we're both walking in the door of the arena, and we just looked at each other. I'm, like, 'Holy shit. I haven't seen this guy in years.' But I love Jake E. And let's see. I love Jake. I'd love him to play on a song any time… Any time. Who knows? Maybe he'll be a surprise guest at one of my gigs."

As for a possible release date for "Legacy", Stephen said: "I'm hoping January, at the end of January at the latest, because I wanna tour it soon."

As the founder, lead singer, and songwriter of the metal rock band RATT, Pearcy led his creation to mega multi-platinum success year after year from 1984 to 1991. RATT climbed up the charts with "Out Of The Cellar", which generated Top 10 singles followed by sold-out tours throughout the world. Throughout RATT's nearly four decades of success with Pearcy at its helm, they released eight albums and played thousands of shows worldwide all the while selling over 20 million records.