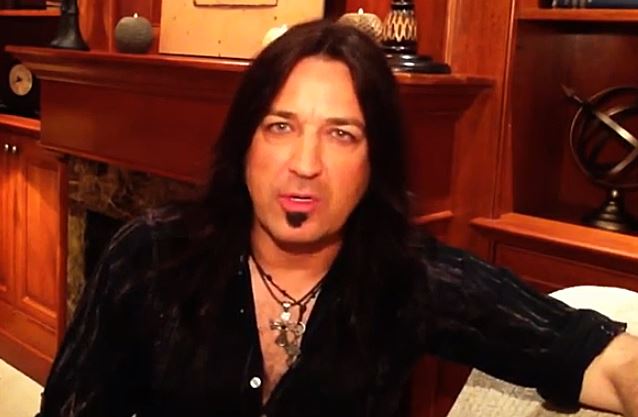 Jorge Fretes of Spain's GoetiaMedia.com recently conducted an interview with guitarist/vocalist Michael Sweet of Christian hard rockers STRYPER. You can now listen to the chat in the YouTube clip below.

STRYPER's new album, "No More Hell To Pay", sold around 9,600 copies in the United States in its first week of release to debut at position No. 35 on The Billboard 200 chart.

"No More Hell To Pay" was released on November 5 in North America via Frontiers Records. The effort was made available in two formats — standard CD and deluxe digipak featuring exclusive video content. Produced by STRYPER guitarist/vocalist Michael Sweet himself, the set features some of STRYPER's strongest and heaviest material ever.

Commented Michael Sweet, "'No More Hell To Pay' marks our 30-year anniversary and what a journey it has been! It's our eleventh studio release since our first album in 1984 ('The Yellow & The Black Attack') and it's quite possibly our best record to date. Why? It's everything you might expect from a STRYPER record — high-octane vocals, layered vocal harmonies, guitar solos galore, driving drums and bass and an energy that hasn't been achieved since our glory days. The message is equally as powerful as it offers hope and inspiration to anyone listening. If you're a STRYPER fan, it'll make you proud to be one. If you're not, listen with caution as you may actually become one."

Regarding the musical direction of STRYPER's new material, Michael Sweet told Screamer Magazine: "The song 'God', which is on 'The Covering'; if you took that song along with 'Bleeding From Inside Out' and 'Blackened' [from 'Second Coming'], and you put it on the same album, that's a pretty good indication of where we are going and where we are at right now. But at the same time this album is all its own."

He added: "Every song has a hooky guitar riff. Everything is in minor keys, so it's a little darker sounding and a little tougher. It's definitely our heaviest record and I think people will be pleasantly surprised.

"The people who do like the poppier side of STRYPER, like 'Calling On You' and 'Holding On', this record isn't going to really give them that. There are a lot of vocal hooks and melodies going on, but it's a little darker, and a little edgier. To reference, there is less songs like 'Calling On You' and more songs like 'To Hell With The Devil'. It's more in that vein than the poppier vein."