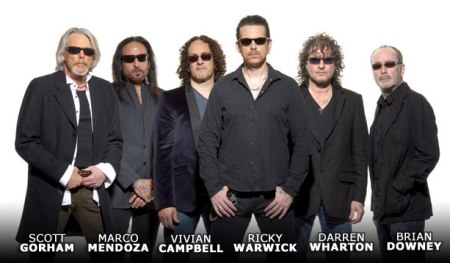 Gibson conducted an interview with DEF LEPPARD/THIN LIZZY guitarist Vivian Campbell when THIN LIZZY played in Berlin, Germany on February 8, 2011. The 10-minute clip, which includes THIN LIZZY soundcheck footage from Berlin, can be viewed below.

Almost 25 years after the death of legendary Irish rocker Phil Lynott, THIN LIZZY recently hit the road again — this time with Ricky Warwick at the helm.

Gorham recently told Billboard.com that it may be time to bring THIN LIZZY back into the studio again. "That's the No. 1 question we're getting from people — are we gonna record some new material?" Gorham said. "The fans seem to trust this lineup, and I don't blame them. We've kind of jumped this emotional hurdle together. Ricky's [Warwick, vocals] writing some fucking killer lyrics, and with the kind of talent that's in THIN LIZZY now I think we can pull off a really cool set of tunes. At least it's something that we can think about now, where before it wasn't on the table."