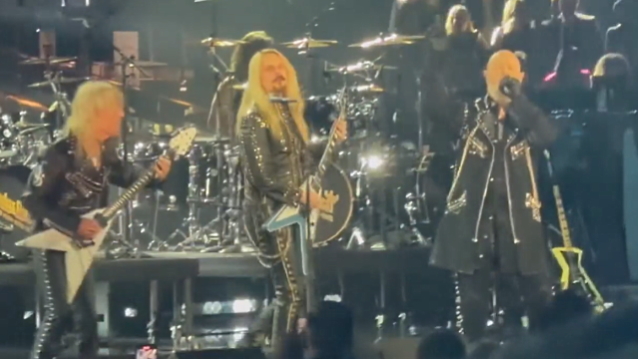 British heavy metal legends JUDAS PRIEST were reunited with guitarist K.K. Downing and drummer Les Binks for a performance at the Rock And Roll Hall Of Fame induction ceremony Saturday night (November 5) at the Microsoft Theater in Los Angeles.

Last month, Hill was asked by the Detroit Metro Times if he thought there was any chance of ever reconciling with Downing and him rejoining PRIEST. Hill responded: "I think time is not on our side for that, you know? Never say never, put it like that. [Downing's] gonna be there at the Rock And Roll Hall Of Fame anyway. He's gonna get up and play some songs with us there. It might kickstart something; I don't know. On the other hand, he might pull us all apart. [Laughs]"

Earlier last month, Downing confirmed to Ultimate Classic Rock that his goal with the Rock Hall performance was "to represent the attitude and hopefully the legend of what JUDAS PRIEST is and has become and what it means to everybody who's been on that very long journey through the decades with the band. And hopefully it will just kind of remind people and bring back some cherished memories of the heavy metal parking lots all around the world."

Downing added that performing with PRIEST again would be like riding the proverbial bicycle, more than a decade after the guitarist last played with the band. "It's what I've done so many times," Downing said. "It's almost like cracking a beer, let alone riding a bike. It's embedded in me. It's what I do. So it'll be quite something to look forward to, just to get up there and crank the amps up and just do it once again, for that short moment in time."

The 2022 Rock Hall induction ceremony will air at a later date on HBO and stream on HBO Max.