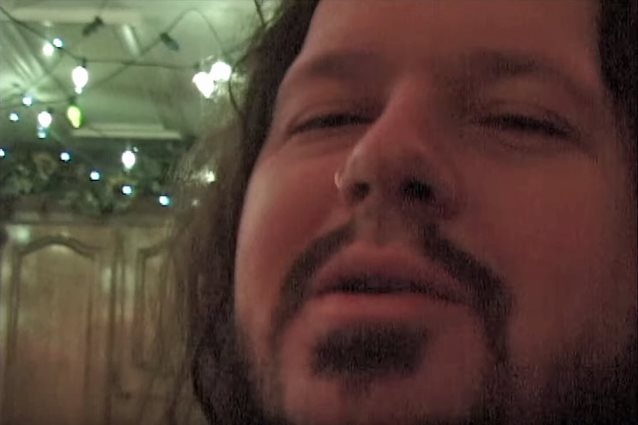 Watch New Clip From DIMEBAG DARRELL's 'Dimevision Vol. 2: Roll With It Or Get Rolled Over' DVD/CD

With 2006's "Dimevision Vol. 1: That's The Fun I Have", fans of "Dimebag" Darrell Abbott and his work with PANTERA and DAMAGEPLAN were afforded the chance to see into the world of the legendary guitarist. Compiled from the many, many hours of video footage captured between the mid-'80s and his later years, it was a funny, touching and poignant memorial.

Metal Blade Records has now announced the release of "Dimevision Vol. 2: Roll With It Or Get Rolled Over" — another true celebration of the man and how he lived his life — on November 24. Pre-orders are available at this location. The DVD/CD set — which will include more raw footage, true gems and classic Dimebag moments — will also include five previously unreleased demos, picked from a vast catalog Dimebag accrued since longtime girlfriend Rita Haney gave him his first four-track in 1984.

Fans of Dimebag, PANTERA and DAMAGEPLAN who have had the opportunity to watch "Dimevision Vol 1: That's The Fun I Have" know it is a funny, touching memorial. "Dimevision Vol 2: Roll With It Or Get Rolled Over" continues this tradition, and today, Metal Blade, Rita Haney and Daryl "Bobby Tongs" Arnberger are pleased to share one of the funniest clips from the set. Watch Dime take part in an "interesting" CPAP machine fitting in the clip below.

Haney says: "This particular trailer's focus is on one of the items available from 'Dimevision 2', along with many other props from past home videos. We want to offer up a piece of these magical volumes so that in the future, with the help of his fans, we'll be able to bring more DVD/CD packages to everyone out there that love Dime as much as we do."

She adds: "I had just rolled outta bed and the doctor fitting Dime was about an hour early for his appointment. Dime and ST were still up partying, so, of course, things never go as planned in Dime's world!

"One thing people need to realize is that when you're getting fitted for one of these machines, it's imperative that you do not speak during the process so they can ramp the proper amount of air through those things, so you have to keep your mouth closed. But as you can see from this segment in full, that's a damn near impossible feat for him at the moment. It's also impossible to be angry at Dime when he made you laugh all the time!"

Going into making "Dimevision Vol. 2: Roll With It Or Get Rolled Over", Haney worked in collaboration with Daryl "Bobby Tongs" Arnberger, who was not only one of Dimebag's closest friends both on and off the road, but also worked as an official videographer for PANTERA, DAMAGEPLAN and a plethora of A-list musicians, from SLIPKNOT to Dolly Parton, along with film editor Rob Fenn. After cataloguing hundreds of tapes, they chose 43 segments to create "Dimevision Vol. 2".

Arnberger explains: "As we all watched, we envisioned certain segments and ideas coming to life in my head, and rather than it serving as a memorial, this second DVD is more about the vision Dime had in his head for this footage, what he actually wanted it to become. This one is more uplifting, funny, and it stays 100% true to his idea for 'Dimevision'."

Fans of the original know that this way of life involved a lot of whiskey, an insane amount of fireworks and a contagious desire to have fun — and like its predecessor, the title is also drawn from the words of the man himself. Having a habit of latching onto a saying or a phrase, this soon became part of his particular dialect, affectionately dubbed "Dime-bonics." "It comes from something he was saying a lot in 2003 and 2004," Haney recalls. "He'd call from the road and he'd say 'man, I'm beat up out here, but that's the highs and lows of rock and roll. You gotta roll with it or get rolled over.'"

"He had a unique way of seeing things, and he always lived with a video camera," adds Haney. "No matter where we went he was always capturing what was going on, and myself and others around him were filming a lot too. In putting out these videos I just want people to see the way he was, 24/7. What you saw on stage and backstage, that was how he lived."

Unsuspecting visitors to the couple's home were regularly drawn in — memorable segments involve girl scouts selling cookies and Dimebag experiencing an "interesting" CPAP machine fitting — and events as mundane as taking a friend to get a pedicure become hilarious, thanks to his particular way of seeing the world. As endlessly entertaining as Dimebag was, there were of course other, deeper sides to his personality, which are also reflected in both volumes. Haney adds: "There were some really touching, deep, heavy and emotional moments in the first one, where he's talking about himself to the camera while in the shower. Filming himself like that was something he did a lot, and you'd have no clue until you're looking through the tapes and come across them, and when you do the goosebumps crawl all over you. People that love and know Darrell are going to be touched by what he has to say, because it's him telling you for the first time."

As for his included demos, Dimebag not only wrote down the lyrics and dates of everything he recorded but also his thoughts on it at the time, which Haney will also be sharing with fans. However, she's quick to point out that no one should expect high production standards ("It's called a four-track for a reason!") and that these are not "lost" PANTERA tracks. "These songs come from his 'off' time; it was entertainment to him. One of them was even inspired by a George Michael solo record coming out back in the '80s!" she laughs. "But he loved making music and he appreciated all kinds of music, whether he was making a joke of it or not, it still caught his ear, and I hope people can enjoy these songs for what they are and the spirit they were made in."

With so much footage left over, fans can rest assured that as fulfilling as "Dimevision Vol. 2: Roll With It Or Get Rolled Over" is, there's still a lot to look forward to. Haney says, "We hope to make ['Dimevision'] an annual thing. It will all depend on if the fans want it and support it!" 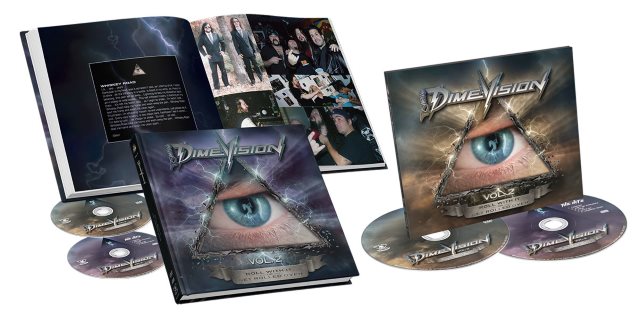 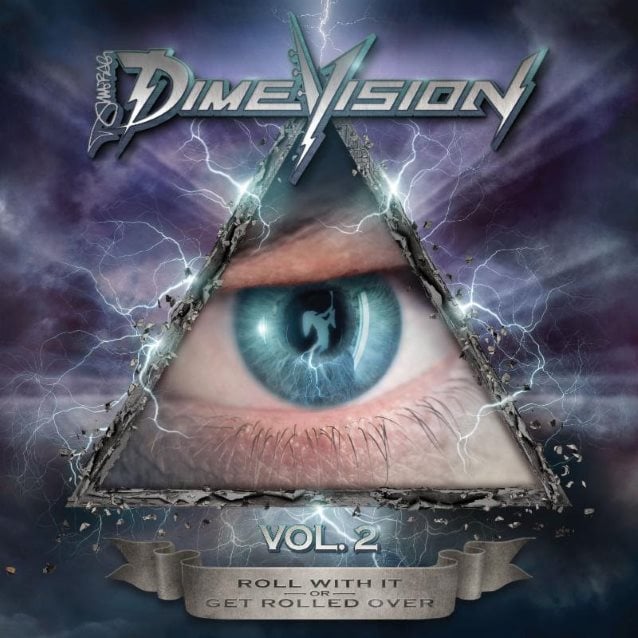