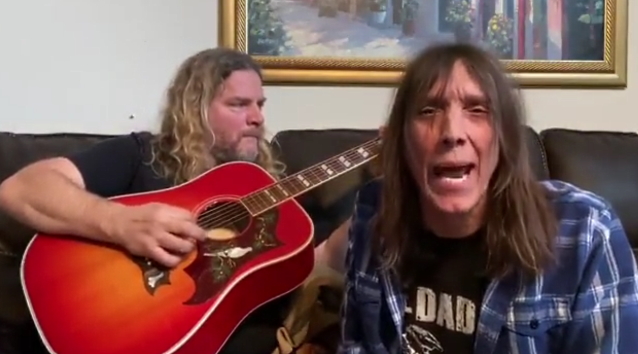 Video footage of TESLA's Frank Hannon and Jeff Keith performing an acoustic version of the band's song "Stir It Up" can be seen below.

The original recording of "Stir It Up" appeared on TESLA's 1991 album "Psychotic Supper".

TESLA has spent most of 2019 touring in support of its latest album, "Shock", which was released in March of that year via UMe. The follow-up to 2014's "Simplicity" was produced by DEF LEPPARD guitarist Phil Collen.

TESLA bassist Brian Wheat admitted to SiriusXM's "Trunk Nation With Eddie Trunk" that "Shock" divided the band's fans due to its lighter, pop-like sound, with some blaming its direction on Collen, who co-wrote many of its tracks. The disc was recorded piecemeal while TESLA was on tour with DEF LEPPARD, with some of the tracking taking place in backstage areas and hotel room lobbies.