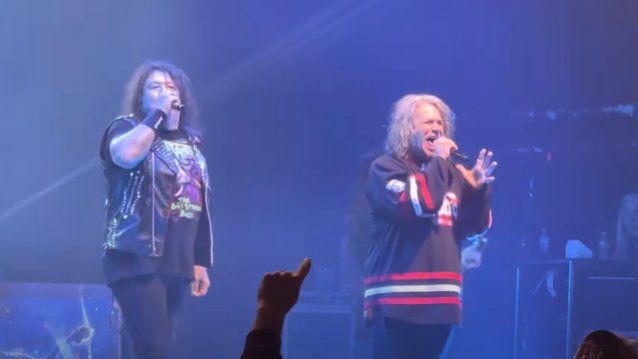 Watch: TESTAMENT Joined By EXODUS's STEVE 'ZETRO' SOUZA For 'Over The Wall' Performance In Boston

TESTAMENT was joined by EXODUS frontman Steve "Zetro" Souza for its performance of the song "Over The Wall" on May 2 at the House Of Blues in Boston, Massachusetts. The concert was part of the two bands' joint U.S. tour, "The Bay Strikes Back", also featuring DEATH ANGEL.

Souza fronted the pre-TESTAMENT band LEGACY and performed "Over The Wall" live with the latter group before leaving to join EXODUS as the replacement for Paul Baloff. Billy joined TESTAMENT in 1986, just after they had changed their name from LEGACY following Souza's departure.

Regarding how he came to join TESTAMENT, Billy told Metal Hammer in a 2020 interview: "Zet was my younger brother's best friend, so I went to see their gig in Alameda. It was Eric [Peterson] and his brother Derek on guitar, and they all wore priest collars. It was very entertaining. Like, 'Wow, these guys are pretty good.' Shortly after that, Alex [Skolnick, guitar] joined the band and did the demo, and that's when Zet played me the demo with three songs. I was, like, 'Wow, these are really mature songs for those kids I saw playing not too long ago.'

"When Zet decided to leave to join EXODUS, he kind of handed me the baton: 'Call Alex. They need a singer now.’ At that point, I was, like, 'Okay, I'm gonna find a band that I'm gonna join and be a part of it.' And I walked right into that band. The timing was perfect."

Recalling his TESTAMENT audition, Chuck said: "Those guys were wearing leather jackets and into SLAYER and MERCYFUL FATE. They were, like, 'I don't know about this guy. He wears spandex and he's got a streak in his hair.' They were so against me not being the singer. But I got the audition.

"I went down there but the room was so small that all of us couldn't fit in the room. I just put my PA speakers in the room and I stood in the hallway looking in the door, and I did the three songs that they'd done on the demo, and I thought I killed it. They said, 'Okay, you've got it but you've got to dress different. You've gotta wear Levi's and a leather jacket and a T-shirt. No more spandex.' That was a turning point in my life."

TESTAMENT, EXODUS and DEATH ANGEL kicked off the 2022 edition of "The Bay Strikes Back Tour" on April 9 at the Fremont Theater in San Luis Obispo, California. The show marked TESTAMENT's first appearance with drummer Dave Lombardo since he rejoined the group earlier this year.

"The Bay Strikes Back Tour" was originally scheduled to take place last October and November before being postponed due to the coronavirus pandemic.

When "The Bay Strikes Back Tour" was postponed from its original time frame, Peterson said in a statement: "We were really on the fence with this decision. But seeing other bands make it through with a few mild cases and other bigger bands just canceling their entire tours, we felt it is in our best interest to postpone these shows to '22."