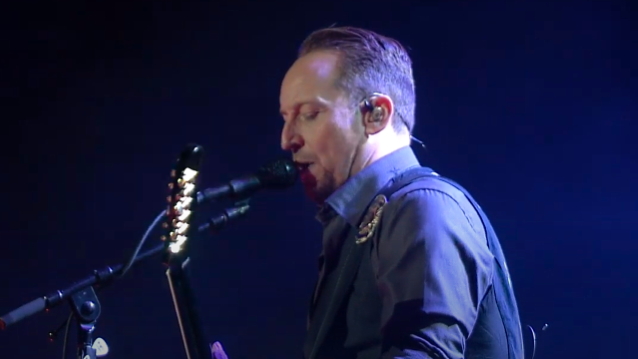 Danish/American rockers VOLBEAT have revived their long-running "Official Bootleg" series with the release of a live video for "Leviathan", the latest single off the band's seventh studio album, "Rewind, Replay, Rebound". The clip, recorded last year at the Barclaycard Arena in Hamburg, Germany, was edited and directed by Brittany Bowman and Shelby Cude, with audio mixed by Jacob Hansen.

In "Leviathan", frontman Michael Poulsen says he's singing from the imagination of a young boy looking out of his bedroom window.

"He already has a feeling that the world can be an evil place, full of bad people," Poulsen told Billboard. "He wants as a youngster to try to clean up the whole world, but he knows that he can't do that. But he believes that he can contact Leviathan, the sea monster, and together they could clean up all the bad things."

"Rewind, Replay, Rebound" was released last August via Republic Records. The disc was produced by longtime collaborator Jacob Hansen and co-produced by VOLBEAT's Rob Caggiano and Michael Poulsen. This marks the first studio album with Kaspar Boye Larsen on bass. To achieve the album's sound, the band also drew upon a myriad of guests. In addition to again working with backing vocalist Mia Maja on several tracks, they also reunited with the Harlem Gospel Choir. CLUTCH vocalist Neil Fallon is featured on "Die To Live", the result of touring together and a love for the singer's gruff and powerful style. Raynier Jacob Jacildo (piano) and Doug Corocran (saxophone) of JD McPherson's band also lend their talents to the song. "Cheapside Sloggers" features a ripping guitar solo by EXODUS and SLAYER guitarist Gary Holt.