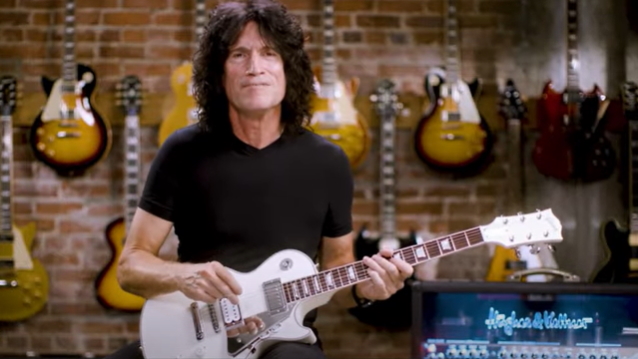 In a new interview with Noise11.com, KISS guitarist Tommy Thayer was asked why he hasn't yet released a solo album. He laughed and responded (as transcribed by BLABBERMOUTH.NET): "Well, I don't know. That's a good question. These days I don't know if people are really interested that much in buying music now, to be honest with you. I mean, KISS isn't doing records, nobody is really doing records, because the business has changed so much. It's all about streaming. And it's hard to sell records these days and people aren't really buying music — sadly, that's just not happening. So it kind of disincentivizes you to spend a lot of time writing [and] recording albums and doing that, even though it's fun and it's cool to go through that creative process. But I don't know if it really makes sense."

Earlier this month, Thayer told Australian Musician editor Greg Phillips that he will continue to play music once KISS completes its ongoing "End Of The Road" farewell tour. "I don't know if I'll ever be in another band and that sort of thing, because how can you stop being in KISS?" he said. "But I'll probably still be involved in music or in the entertainment biz on some level — maybe even with KISS, 'cause KISS is not gonna go away; the touring thing is, but the entity of KISS and the brand and the music, that's not gonna stop. So maybe there's something for me to be involved with that."

He continued: "I've been doing some other things — I've been involved in developing some animation projects, children's animation projects, and maybe some of that will see the light of day. I've also been delving into the wine business a little bit now. I bought some vineyard property up in Oregon, and I've got some wines coming out through my brother's wine label. So there's a lot of things. I'm always pretty busy; I'm quite involved in a lot of things. But as far as bands and things like that, playing in bands, I think this will be it for me as far as that goes."

A month ago, KISS singer and bassist Gene Simmons told Finland's Chaoszine that "End Of The Road" will be extended to hit 100 more cities around the world before he and his bandmates exit the stage for good. Speaking about when he envisions the tour coming to an end, the 72-year-old rocker couldn't say for sure. "We don't know. We've never retired before. This is our first time," he said. "It's like painting a painting or writing a book. When somebody says, 'When is it gonna be finished?' You're in the middle of it; you don't know."

Simmons then spoke about the decision to extend the tour. "The crew is happy. Everybody's happy," he explained. "So we've decided to add another 100 cities before we stop. I don't know how long that's gonna take."

Four years ago, Thayer admitted to Argus Leader in an interview that his addition to KISS in 2003 as the replacement for Ace Frehley was met with some backlash from the band's fans. However, now that he has been in KISS even longer than Frehley's combined years, he said that he has become more comfortable in the lead guitar role.

"I have to be honest, when I first came into the band, there was some pressure," Thayer said. "It was kind of a no-win situation when you're replacing somebody like that. There's a lot of fans who are unhappy with this and I understand. They followed the band for a long time and it's hard to see things like that change sometimes. After a few years went by, I got more confident and more comfortable in the situation, as time goes on, it continues to be a growing experience and something that I get more used to."

Last December, Thayer told Guitar World about what he thinks his legacy with KISS will be: "I don't know if many people realize this, but I've been the lead guitarist in KISS longer than any other KISS guitar player. But I will always be known as 'the new guy' though — no matter what happens. I'm 'the Ronnie Wood' of KISS.

"My legacy will be a guy who came in, worked hard, and was the glue that kept the band together for a long period of time," he continued. "I think the kind of character and personality that I have is that of a team player and somebody who can bring people together and bind things together.

"And I think the reason that we've done so well and so consistently in the last 20 years is because of the personalities, the give and take, and the ability to keep everybody happy… and keep working together on a professional level.

"It works well. I'll probably be that guy that has been in the band longer than anybody else besides Gene and Paul [Stanley], that kept things together, and was the glue that made it work."