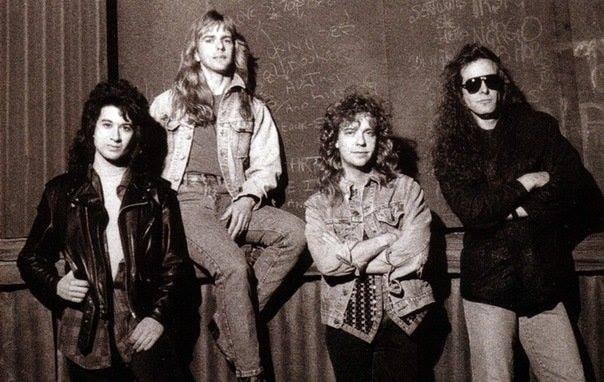 Will There Ever Be A DAMN YANKEES Reunion? 'Nothing Is Impossible,' Says TED NUGENT

During the latest episode of the "Ted Nugent Spirit Campfire" show, legendary rocker Ted Nugent spoke about the possibility of a reunion of the DAMN YANKEES, the supergroup he formed more than three decades ago with Jack Blades, Tommy Shaw and Michael Cartellone. He said (see video below): "Nothing is impossible. I've never said, 'No way. The DAMN YANKEES are never getting back together.' I've never declined it affirmatively. In fact, I've always done just what I think Tom and Jack and Michael have always done, [which] is that we would cherish the opportunity to collide somewhere geographically and unleash the inner DAMN YANKEE beast, because the inner DAMN YANKEE music is a beast… We had nothing but a damn riot together."

Shaw has consistently left the door open to a DAMN YANKEES reunion, telling told SiriusXM's "Trunk Nation With Eddie Trunk" in early June: "Well, we never broke up… We are all still best of friends. [So] who knows? It's hard, because with STYX, we work so much, and to do that [a DAMN YANKEES reunion], it would mean putting [the members of STYX] out of work for a while. So it's a tough one. But every once in a while, we wind up on the same stage."

Asked if he feels there is some "unfinished business" with DAMN YANKEES creatively and whether he would like to do a record or a song with the band to "put a button on it," Shaw said: "Well, we can always do more. I don't think you can ever put a 'we're done' button on any of the members of the DAMN YANKEES. Who knows? Never say never. And we haven't said never."

In 1999, A&R guru John Kalodner tried to reunite the DAMN YANKEES for a new album for the Portrait Records imprint, but Shaw's commitments to STYX prevented him from taking a major part in the writing and the recording. Kalodner later told Melodic Rock about the aborted effort: "I didn't think it was quite good enough, and at the time with 80's style rock, you'd have to come up with something pretty spectacular. I was disappointed in the record mostly because of Tommy Shaw's non-participation. I say that was probably the greatest problem. Tommy was totally an integral part of it. He was busy with STYX and it was sort of my mistake because I just couldn't control him. It's one of those projects that I failed on. I mean the buck stops here. It lacked the input of Tommy Shaw."