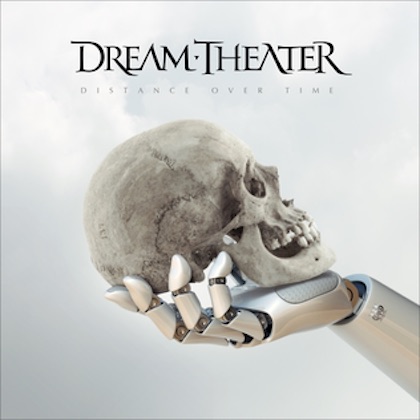 The thirty-year career of progressive metal icon DREAM THEATER has largely been an exercise in musical excess. Even the band's most passionate fans would be hard-pressed to argue criticisms that the group occasionally overdoes it on the musical and vocal extremes of the genre. The group's 2016 record "The Astonishing" went too far though, even for many hardcore fans. Guitarist John Petrucci himself has admitted that the reaction was mixed. The double-disc concept record saw the band drown in a sprawling display of the most pretentious progressive metal indulgences. The album was DREAM THEATER's "Rick Wakeman on Ice" low point.

DREAM THEATER fans that weren't ready to go as far as the band did on "The Astonishing" will be relieved to know that the New York group's latest effort, "Distance Over Time", finds it reining in the artistic ambitions and streamlining its songwriting with stronger focus back on metallic power. Whether it was a self-conscious response to the grandiose spectacle of its previous record, or osmosis from revisiting its 1999 classic "Scenes From A Memory" in preparation for the upcoming tour commemorating the twentieth anniversary of that record, the band ended up putting together a record that rewards longtime fans that appreciated heavier moments on older records such as 1994's "Awake" and 2003's "Train of Thought". Rest assured that this is still a DREAM THEATER record. There is still an emphasis on musical technicality, but the songcraft is much tighter this time around, punctuated by a relatively more restrained vocal performance from James LaBrie.

"Distance Over Time"'s first three tracks will feel like a cleansing experience for those burned by "The Astonishing". After a thirty-second slow-burn intro, album opener "Untethered Angel" immediately sheds the shackles of previous excesses, launching the album with a hard-rocking start. LaBrie's vocals are distorted with a modern-rock-radio edge. John Petrucci's rhythm guitar riffs are fuel for a mosh pit. John Myung's bass is downtuned with a nu-metal crunch. Jordan Rudess's keyboards and Mike Mangini's drums are boosted very high in the production mix, increasing the aura of a more metal production, and all of it fueling a banger that could have fit on the heavier side of the band's 2002 double-record, "Six Degrees of Inner Turbulence". The first respite from the metallic barrage comes halfway through "Fall into the Light". Petrucci soars with a melodic guitar solo interlude, but even that is a temporary break before Rudess comes in strong with a heavy keyboard-laden jam-out to close out the track.

While "Distance Over Time" is much more grounded in an objectively metal blueprint, fans that are drawn to DREAM THEATER's musically headier moments still have those indulgences to dig through. "Barstool Warrior" launches with a mechanical prog-metal whirlwind reminiscent of RUSH's classic moments before settling into a composition highlighted by some of the most beautiful guitar and keyboard work to be found on the record. "At Wit's End" begins with dizzying instrumentation that sounds like it could have been an outtake from a LIQUID TENSION EXPERIMENT record. "Out of Reach" is a stirring ballad punctuated by a hair metal guitar solo that is sure to please those drawn to the softer side of the band's 1992 breakout, "Images and Words".

DREAM THEATER nearly drowned in the deeper waters of the progressive metal sea with "The Astonishing"'s extremes. Luckily with "Distance Over Time", the band has managed to swim back to shore with a redemptive metallic treasure to reward those willing to give the band another chance.