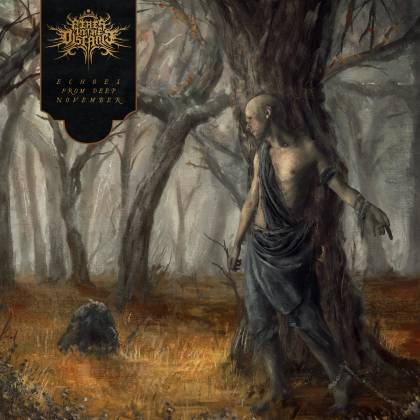 FIRES IN THE DISTANCE

Metal's relationship with keyboards hasn't always been the most amicable: readers of a certain age will doubtless remember numerous bands proudly proclaiming that no such nonsense would be tolerated on their record. Nonetheless, when used appropriately, keyboards unlock the key to a whole world of atmosphere that has been skillfully plundered by everyone from IRON MAIDEN and KING DIAMOND through to a great number of dramatically inclined doom metal bands. FIRES IN THE DISTANCE certainly tick most of the funeral doom boxes on their full-length debut, but "Echoes From Deep November" employs keyboards in a subtly new way, frequently placing them in the sonic foreground, like some magical disturbance in the air. Opening epic "The Climb" is simply dazzling. Whether it's those twinkling, shimmering keys or the thrill of hearing a band nail this style with all the aplomb of first album SWALLOW THE SUN, this is a wonderful combination of the familiar and the fresh.

FIRES IN THE DISTANCE clearly have refined melodic sensibilities: none of these songs get bogged down in atmospherics, and hooks always shine through the slow-motion melee. "The Lock and the Key" is another spellbinding exercise in gentle subversion, as sequenced electronics skitter and spark across the song's underlying morbid crawl, amid a series of anthemic crescendos worthy of PARADISE LOST at their crushing best. "Reflections in the Ice" drifts through chilling mists, with a dash of AMORPHIS-like folksiness billowing its sails, another bewitching shower of electronics and synthesized strings adding layer upon layer of mystique and charm to the whole thing. "Chained to the Earth" goes even further, harnessing the insistent pulse of sequenced bleeps to generate a deathly momentum, as the Connecticut quartet conjure more bleakly stirring melodies.

Progressive, almost by default, and pointedly cinematic, there is an in-built sense of hugeness here, as if FIRES IN THE DISTANCE are channeling some unnamed, majestic force. Significantly, they're also a phenomenal heavy metal band, with an endearing penchant for killer choruses and mellifluent soloing straight from the Scandinavian melo-death school.

The final proof in this irresistible sonic dessert is that three-and-a-half minute instrumental closer "Sundial" somehow conspires to generate as much atmosphere, drama and intrigue as its much longer compatriots. It's an exhilarating climax to an album that, while not particularly revolutionary, does fascinating and deeply satisfying things with cherished ingredients.