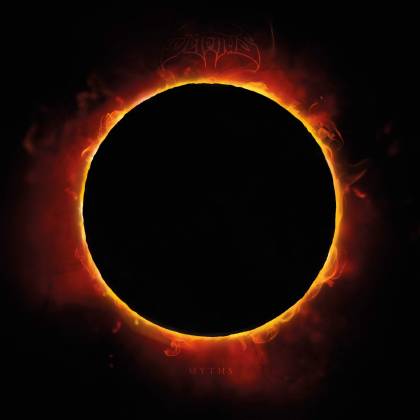 Received wisdom has it that the British thrash metal scene only produced a handful of notable bands. Everybody knows about XENTRIX, SABBAT, ONSLAUGHT and the rest, but despite not exerting a great deal of commercial weight, the UK's contribution to thrash was much deeper than generally advertised. One album that almost certainly escaped the notice of most was DETRITUS's 1990 debut album, "Perpetual Defiance": an unsung gem from the tail end of the first wave of thrash, but also a highly distinctive opening salvo from a great band with terrible timing. The follow-up, "If But For One" (1993),was a solid effort, too, but history has generally declined to pay respects.

Quite what inspired DETRITUS to reconvene and make "Myths" remains to be told, but be thankful that they did, because this is easily one of the most original and striking thrash records to be released in a long time. One thing has clearly not changed since the band went on a seemingly indefinite hiatus midway through the '90s: DETRITUS still sound deliciously and purposefully out of whack with the thrash orthodoxy. The difference between the original and new incarnations of the band is that thisDETRITUS have thrown off the shackles of genre standards and mutated into something wholly unexpected. Where the band's early material was undeniably traditional up to a point, "Myths" reimagines thrash as a stately, mid-paced show of pitiless riffing power, with melody and melancholy thrust to the forefront. Consequently, this isn't really a thrash metal record at all: instead, it's a quietly progressive, red-blooded heavy metal affair, but with an underlying oddness that sets it apart from just about everything else.

Once again led by bassist Mark Broomhead's distinctive bellow, opener and recent preview single "Bright Black" lays down the new DETRITUS manifesto with no apologies. Fans of unabashed chug will love the song instantly, such is the balls-out stomping power on display, but it's only superficially straightforward. As skewed vocal hooks and angular guitar motifs collide, all the usual comparisons seem suddenly redundant. This is downtempo thrash, but through a cracked looking glass: subtly ingenious songs, delivered with industrial quantities of gusto. It's generally true that when metal bands crowbar a ballad onto an album, it's a terrible idea, executed poorly. On "Myths", DETRITUS deliver the weirdly affecting "Tale of Sadness" early on, almost as a gesture of defiance. It's a killer song, too, with another slightly off-center melodic core and acres of bruised regret.

A centerpiece worthy of the description, "Exoria" is where DETRITUS floor the creative accelerator. For all its off-kilter charm, this is also an album full of powerful, emotionally incisive anthems, and this nine-minute exercise in pomp and grandeur is the most ruinously effective of the lot. A master class in light, shade and bringing the hammer down, it's only topped by the closing "Forever Soldier", which combines brute force and bluster with a generous helping of sublime detours and exquisite melodic touches.

Over a quarter of a century from their last full-bore foray, DETRITUS sound like a band that have finally discovered their true calling. This is a simply stunning piece of work.